The British were the first to compare Jews to Nazis as early as 1942. Arabs enthusiastically followed.

The "Jew as Nazi" meme is common among antisemites. To Jew-haters, the grotesque analogy is  delicious: the Jews are just as bad as their oppressors, the Jews are just as guilty of genocide, killing Jews is as moral as the French Resistance, Jews have no right to defend themselves, Jews haven't learned the "lessons" of the Holocaust - as if the Holocaust was merely a university for Jews who keep flunking their classes while the rest of the world who stood by and allowed them to be slaughtered are the professors.
Who was the first to make this disgusting claim?
The earliest I can find comes from the British.
Lord Moyne, the British Minister of State in the Middle East, engaged in debate in British Parliament on June 9, 1942 about whether Jews in Palestine should be allowed to fight the Nazis. Lord Moyne opposed the idea, forcefully supported by Lord Wedgwood. His arguments sound a lot like antisemitism: he complained that the Jews wanted to allow their fellow Jews to immigrate to Palestine to save their lives:

The Zionist claim has raised two burning issues: firstly, the demand for large-scale immigration into an already overcrowded country, and, secondly, racial domination by these newcomers over the original inhabitants..... The inhabitants of that small country—about the size of Wales, but much less fertile—are already threatened with conditions of grave congestion. At the present rate of increase, the Arab population will double within twenty-seven years. All the fertile soil is not only occupied but very closely cultivated. At the end of the last war, the Jewish community numbered 80,000. It now numbers about 450,000; and yet the Zionist Organization have indignantly refused the terms of the White Paper, under which further immigration should be allowed up to another 75,000 in five years.....

Lord Wedgwood's effort has a far greater power of mischief in being addressed to America. It must surely have a deplorable effect upon our Allies to be told by an ex-Cabinet Minister that the Palestine Administration do not like Jews, and that there are enough Anti-Semites in Great Britain to back up the Hitler policy and spirit. This suggestion is a complete reversal of the truth. If a comparison is to be made with the Nazis it is surely those who wish to force an imported régime upon the Arab population who are guilty of the spirit of aggression and domination.

Here, he directly compared all Zionists who wanted to save the lives of millions of Jews to the Nazis.
Lord Moyne also threw in the Khazar theory that Ashkenazic Jews aren't really Jews and don't belong in the Middle East:

It is very often loosely said that Jews are Semites, but anthropologists tell us that, pure as they have kept their culture, the Jewish race has been much mixed with Gentiles since the beginning of the Diaspora. During the Babylonian captivity they acquired a strong Hittite admixture, and it is obvious that the Armenoid features which are still found among the Sephardim have been bred out of the Ashkenazim by an admixture of Slav blood.

Prime Minister Winston Churchill brought up the analogy of Jews to Nazis not as a fact but as a fear after Lord Moyne was assassinated by members of Lehi in Egypt. From November 17, 1944:

This shameful crime has shocked the world. It has affected none more strongly than those, like myself, who, in the past, have been consistent friends of the Jews and constant architects of their future. If our dreams for Zionism are to end in the smoke of assassins' pistols and our labours for its future to produce only a new set of gangsters worthy of Nazi Germany, many like myself will have to reconsider the position we have maintained so consistently and so long in the past. 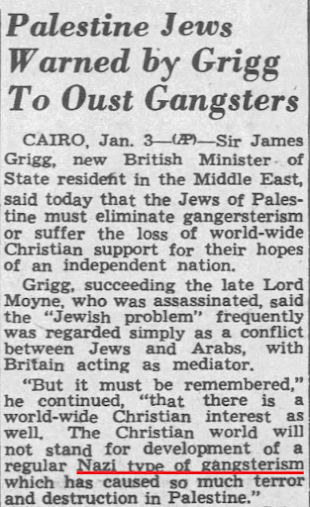 The assassination truly shocked England and the world. Unlike Lord Moyne's earlier comments, which were clearly antisemitic,  Churchill's and Grigg's comments can be interpreted as being only against the Jewish groups that attacked the British, not against all Zionists.
Nevertheless, they opened the door for more disgusting uses of the analogy.
The next British official to compare the entire Zionist movement to the Nazis was Sir Edward Spears, in 1946 well after the full horrors of the Holocaust were well known. From United Press, January 30, 1946:

Arab diplomats took up the slander around the same time, with the "Jew as Nazi" theme that has remained a consistent feature of antisemites ever since.
The Arab League made the analogy on December 6, 1945, again comparing Jewish immigration to the Nazis: (Manchester Guardian, December 7, 1945) 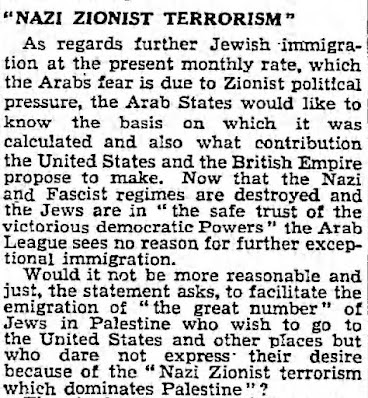 In September 1947, the Arab delegate accused Jews of Nazi behavior at the very same time he threatened that the Arabs would kill them all: 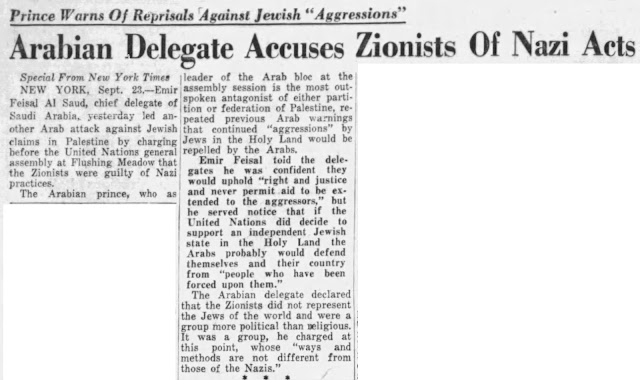 And in October 1947, the head of the Arab delegation to the partition talks in Lake Success said that Zionists weren't interested in Palestine but wanted to use that as a gateway to take over the entire Middle East - just like Nazis, somehow. 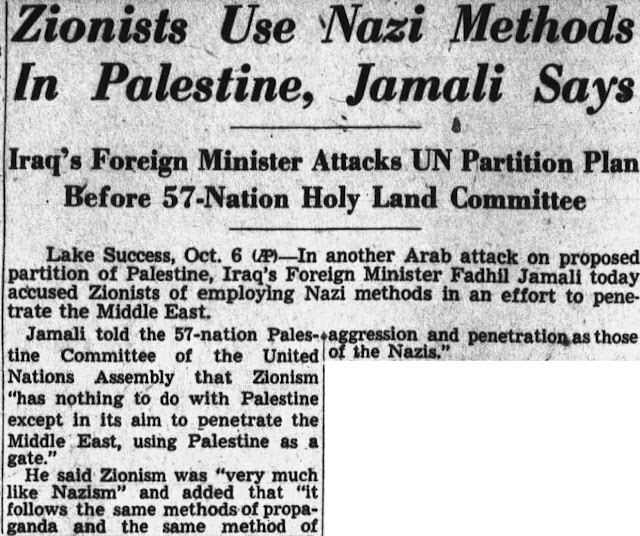 Notice that the exact analogies are all over the place: the specific Nazi actions that the Jews supposedly are guilty of keep changing. To the modern antisemites, comparing Jews to their murderers is the primary goal and the details are not important. The validity of the analogies have no bearing on the analogies themselves. The entire point is to say that Jews are the worst people on Earth and no better than the Nazis who slaughtered them.
The accusation is not meant to be accurate. It is meant to hurt Jews.