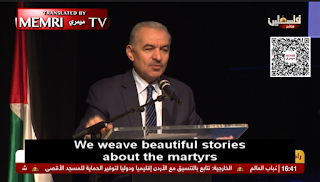 On January 9. Palestinian prime minister Mohamed Shtayyeh went on TV to celebrate "Martyrs Day."
He specifically mentioned three "martyrs" executed by the British in 1930: Muhammad Jamjum, Atta Al-Zir, and Fuad Hijazi.
They were sentenced for their roles in the anti-Jewish pogroms of 1929 in Safed and Hebron.  133 Jews were killed throughout the land, with most of the murdered in Hebron, Jerusalem and Safed.
Originally, 25 Arabs were sentenced to death for murder. Most of those sentences were commuted. Only three remained to be executed. (Palestine Bulletin, June 1, 1930)

This article published on June 18, 1930 - the day after the executions - shows that the depraved Palestinian Arabs had declared the 17th to be "Martyrs Day," proving that their bloodlust was there decades before Israel.
This proclamation sounds identical to similar declarations that happen today in Palestinian Arab areas. 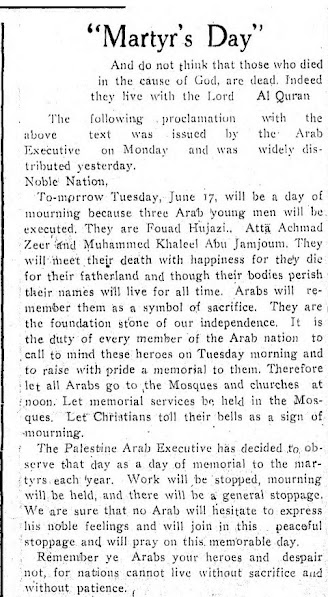 But who were these heroes?
They were the ones who were guilty of multiple murders, who killed women and children, who attacked Jews - not Zionists - in communities that have been there for centuries.
And their main motive wasn't "Palestine." It was to steal loot from the Jews. 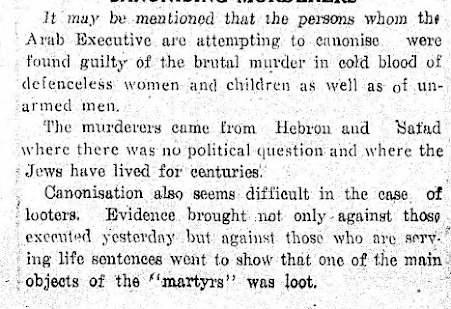 Two of them confessed to murdering 8 Jews between them before execution.

These disgusting pieces of trash are Palestinian heroes today. These murderers are people to be admired. These people who massacred innocent Jews, including women and children, are people that Palestinians want to emulate.
I didn't say it. The prime minister of the Palestinian Authority did.