On Friday night, a large explosion in Tyre killed at least one person and injured a dozen others.
You can hear secondary explosions in this video.
While Lebanese and Arab media quoted Hamas members who admitted that the explosion was in a Hamas weapons depot - which may have been beneath a mosque that was destroyed - Hamas had a different explanation.

After examining the circumstances surrounding the accident and listening to eyewitnesses, it is revealed that the explosion was caused by a short circuit in a warehouse that includes oxygen cylinders for coronavirus patients and an amount of cleaning products, disinfectants, and preliminary material allocated to fight the Covid-19 pandemic. 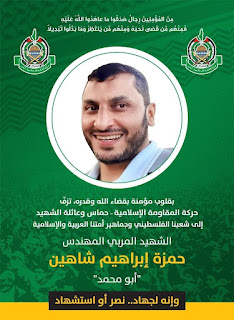 But then one of the people injured in the explosion, Hamza Ibrahim Shaheen, died of his injuries.

He was a member of the Al Qassam Brigades of Hamas. Their description of his heroic death contradicts the story about the short circuit, as they said that he was "martyred while on a jihad mission."

Hamas called for a major funeral in Lebanon today for this "mujahid."

A Lebanese official investigating the blast said that it was definitely ammunition that exploded, not oxygen tanks.

Lebanese are making fun of Hamas' explanation for the explosion, especially now that it was forced to contradict itself as to the heroic nature of the "martyr."