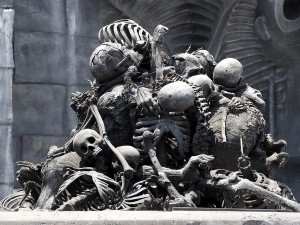 Hinnom Valley, July 29 - A scientific effort to alter history to conform to a narrative under which Palestinians constitute the ancient indigenous people of the Holy Land hit a snag today when operatives returning from a mission to fourteenth-century-BCE Palestine reported that the population of the time, which kills babies and young children to appease the gods, considers Palestinians uncivilized, uncultured brutes deserving only of disdain and possibly abuse.

A delegation of Al-Quds University researchers and Palestine Liberation Organization security and diplomacy agents came back from their trip to pre-Israelite Palestine Thursday morning with the disappointing and frustrating news that the ancient Canaanites rejected in no uncertain terms their overtures to collaborate against the Jews. The time-travelers bore a harrying tale of miscommunication, disastrous assumptions, and a characterization by Moloch-worshipers of twenty-first-century-CE Palestinians as far too barbaric for any alliance.

"We barely got out of there with our lives," admitted Noura Erekat, whose role in the mission involved liaising with the ancient natives in Arabic, which in Palestinian sensibilities has always been the native language of the Levant. "They couldn't understand us, and we couldn't make heads or tails of what they were saying, at first. It must have been a different dialect of Arabic. We eventually figured things out, but they never dropped their hostile, suspicious attitude, and things only got worse when we explained our origins and our methods. They just stood there for a moment, dumbfounded, then started yelling and trying to stone us."

"It was the gesturing and body language, as well as the tone, that told me what was going on," added Al-Quds University Professor of Linguistics Noam Chomsky. "We managed to calm things down enough to get a rough idea of their objections, and it turns out they thought we were total animals, and deluded on top of that. We had to hop right back into the time machine, because a few more moments of that tense interaction and we'd never have come back in one piece."

"Apparently they thought it crazy, inhuman to put children in harm's way to generate international outrage at the enemy when the children come to harm," Chomsky mused. "They seemed to have this weird notion that there are limits on what you can do to children for the collective good."

"Nobody even heard of 'Palestine,'" monotoned a distraught Mustafa Barghouti. "I can't wrap my head around their initial objections to our being Philistines, which to them meant 'invaders' or something, as if we were the ones who didn't belong. You know what? I think the Zionists got there first and prevented our mission from succeeding somehow! We have to figure out when and how that was, but so far, in the numerous non-interactive exploratory missions, we haven't detected them, as if no one manipulated the ancient timeline and the Zionist narrative nevertheless fits. They're so sneaky!"

"Also I think I stepped on a butterfly," he added.