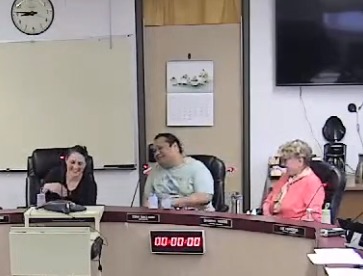 From the Peninsula Clarion:

Seward City Council member Sharyl Seese issued a public statement of apology on Tuesday for comments she made during a council work session in which she referred to negotiating a price down as “Jew them down.”
The comments were made at the end of an almost two-hour work session during which the council discussed with city administration how to best spend $1 million given to the city by Norwegian Cruise Lines.
City administration and the council agreed to reconvene with further details about using $500,000 for developer reimbursement and $500,000 to expand child care options in the city at a later date. It was to those figures that Seese said the city could continue to negotiate.
“Maybe they can get other stuff to pay the difference to get the building and maybe we can Jew them down,” Seese said.
“You mean negotiate them down? Is that what you meant to say?” Seward Mayor Christy Terry asked.
The comments were met with awkward laughter by some council members, while Seward Vice Mayor Tony Baclaan put his head in his hands. The work session was almost immediately adjourned after the comment was made.
In the statement of apology issued Tuesday, Seese said she was “embarrassed” and “very sorry” for the comments.
“Please accept my sincere apology for what I said last night during my comments at the work session,” Seese wrote. “I would never want to hurt or offend anyone, and my mouth got the best of me. I had a sleepless night worrying about hurting people.”

If you look at the video, the reaction from the council members is almost more offensive than the statement itself. Practically all of them laugh; the mayor's correction "You mean negotiate them down?" is said with a big smile, as if Seese said a naughty word that everyone says but that shouldn't be said publicly.
You can be sure that if Seese said a racial slur that the reaction would have been shock, not laughter.