Al Jazeera got an exclusive look at Hamas tunnels under Gaza, because they are essentially the official news network of Hamas.
Hamas partnered with the Qatari channel in order to "prove" that Israel didn't cause extensive damage to the tunnel system. Israel, of course, notes that the Hamas "metro" is hundreds of kilometers and the IDF never claimed to have destroyed it all.
The IDF says that it destroyed about 100 km of tunnels, Hamas claims to have built over 500 km of tunnels - which must make Gazans feel very insecure.
Last week, Hamas gave an award to Al Jazeera for its Gaza war coverage, for not deviating from the stories that Hamas wanted them to do.
While I cannot understand the Arabic, it seems obvious that the Al Jazeera reporter didn't ask questions like, "If you can build these tunnels, why don't you build bomb shelters for the people you rule?" or "Can you show me a tunnel that Israel destroyed?" 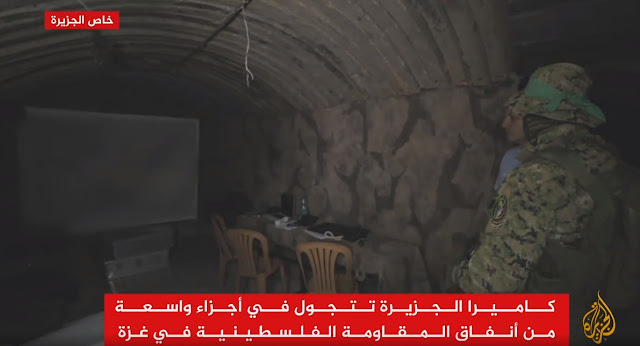 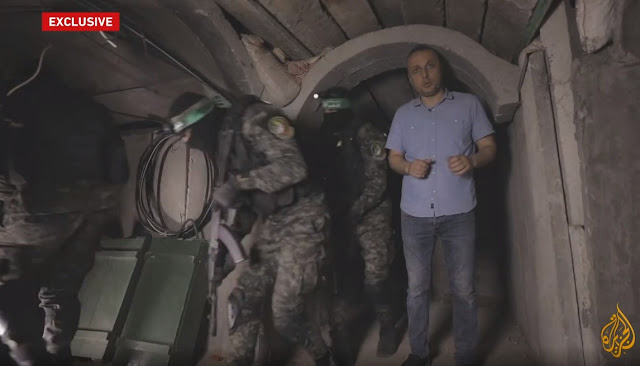 Reporter: "This is the first time that the Al-Qassam Brigades releases such images of tunnels following the recent war. These are rooms, communication devices, and maps that are used by the Al-Qassam Brigades to conduct the battles and operations against the Israeli army."
Jihad, Al-Qassam Brigades fighter: "Now we are walking inside a network of tunnels that spans the entire Gaza Strip. It was used during the recent war to conduct combat operations. This is one of the command and control centers that were used during the war, and it is still being used after the war. As you can see, it is ready with all the equipment and the devices in order to command the operations and organize the troops."
Reporter: "Long and extended passages, ammunition depots, and rocket launch pads, are all part of this underground military and operational complex, as claimed by the Al-Qassam Brigades. The Israeli army said that this complex was one of its main targets in the recent war against the Gaza Strip, and that most of it was destroyed, rendering these tunnels nonoperational. However, Al-Qassam Brigades is talking only about parital damage."
Musa, Al-Qassam Brigades fighter: "We incurred only limited damage. Thanks to Allah, immediately after the war ended, we have renovated this area and restored its readiness."
[…]
Reporter: "Al-Qassam has been building and developing its tunnels for decades, and used them in many combat missions and operations, of which the most prominent was the capturing of Israeli soldiers. Al-Qassam Brigades considers these tunnels to be a strategic weapon in Gaza, and believes that they will remain the main battlefield in any future war against Israel. Hisham Zaqqut, Al-Jazeera, reporting from Gaza, Palestine."