When a Gaza family is killed in an airstrike, there is almost certainly a terrorist in the house 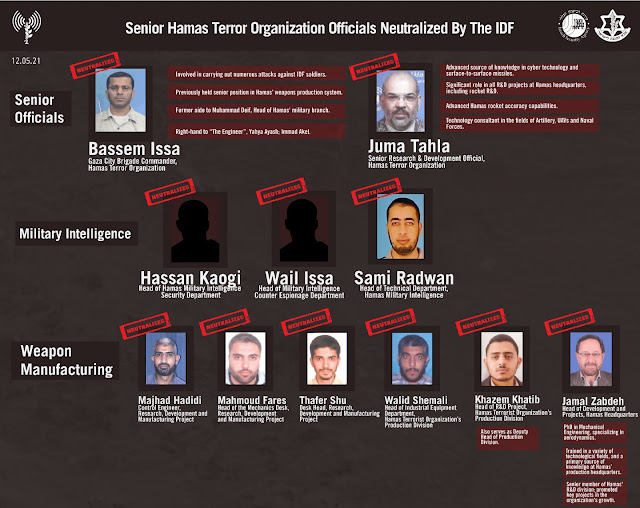 Last week, Israel killed a large number of senior Hamas terrorists, including Bassem Issa.
Hamas has issued a martyr notice for Bassem Issa which admitted that he was killed "with a group of his brothers" - but it doesn't name them.
The Hamas-run Gaza Health Ministry is not reporting their names.
The Gaza "huamn rights" NGOs that pretend to list every person killed in Gaza don't mention that they were killed to begin with, let alone their names.
Even though we know that many Hamas and Islamic Jihad terrorists have been killed, there are very few public funerals.
This is all deliberate policy - to make it look like Israel is indiscriminately dropping bombs and killing only civilians. Everyone is in on this deception, whether by choice or by intimidation. Journalists, NGOs, ordinary Gazans - all are keeping quiet about Hamas deaths, Hamas rocket firings, Hamas misfires that result in Gazan deaths.
If they would announce the names of their dead, it would be easy to see that many of the civilians killed were effectively meant to be human shields for them. In 2014, Hamas commanders were invariably among large families who were killed - but it took months to find that out.
Sometimes, the terrorist was a member of the family that was killed. Here are two examples from 2014, which come from B'Tselem, showing the names of the terrorists who were killed along with their families: 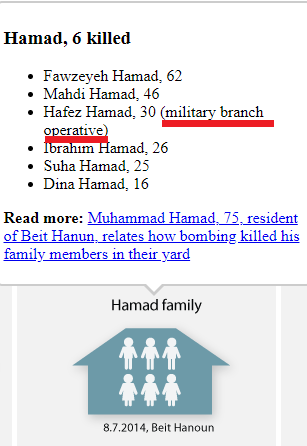 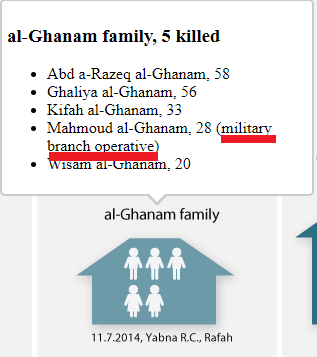 More chillingly, sometimes it was found that one of the people killed with a family was a terrorist - NOT related to the family.
In 2014, there were articles about the deaths and injuries to the Ziyada family in an Israeli airstrike, mentioning that they had a relative by marriage who saved Jews during the Holocaust. Among the dead in the rubble of the home was Mohammed al-Maqadmah, pictured above, apparently unrelated to the family but a member of the Qassam Brigades
Why was he there?
Perhaps he used the house as a command and control center. Perhaps he held them hostage as human shields. Either way, the IDF was targeting him, not the family.
Similarly, we saw other lists of people killed in family homes who were not members of the family - and were members of terror groups.
25 members of the Abu Jame' family were killed - along with a single terrorist named Ahmad Sahmoud, according to B'Tselem.
8 members of the Abu Nijem family were killed while hosting two terrorists, Daniel Mansur, 44 and Abd a-Nasser al-'Ajuri, 32.
3 members of al Al Masri family were killed while hosting terrorist Amjad Hamdan, 24.
6 members of the Al-Bakri family were killed , along with 32-year old Ibrahim al-Misharawi of Islamic Jihad.
We cannot know the circumstances of every incident yet - whether families were killed by errant terror rockets or IDF bombs - but we do know that the IDF warns civilians before it attacks a site where the target is terror infrastructure.
So if there was no warning, either the target was a major terrorist or it was a mistake.
Based on what I know of the layers of approvals needed before the IDF drops bombs in populated areas, mistakes are rare.
It is a shame that the IDF cannot publicize its targets while fighting is raging, because that would compromise security. But we have a large amount of information from previous wars that shows quite definitively that the IDF does not target random innocent families as the media likes to portray.
Journalists should be doing the job of identifying the actual targets of these attacks. But journalists in Gaza will not do anything Hamas doesn't approve.
Now, one an argue if such a strike is proportionate under international law. This means that given the information available to a military commander, the anticipated civilian toll is proportional to the anticipated  military benefit gained from the attack. I don't know how important these militants are - but the IDF does, and given how much care they take to avoid unnecessary civilian casualties and the number of approvals needed before an airstrike, we can assume that they are operating within the law, despite what armchair critics say from thousands of miles away.