UPDATE: Busting One Heck of an Antisemitic Myth on Wikipedia (Judean Rose) 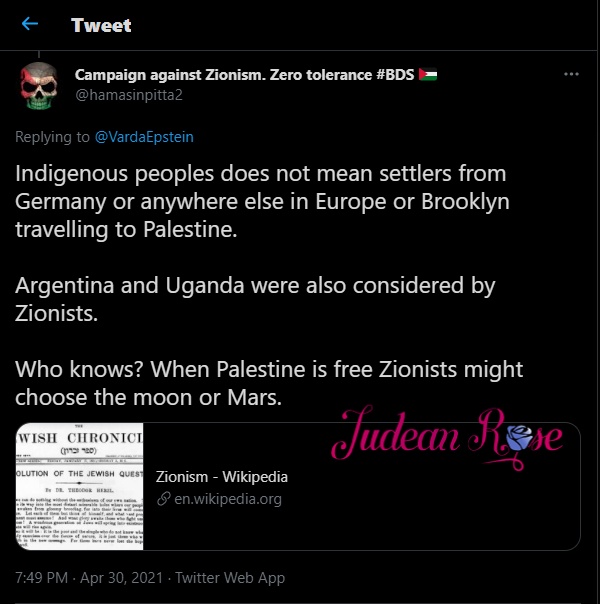 It all began with a private message: “Arabs are passing out sweets on Twitter to celebrate the death of Jews in Meron.” There was a link to a tweet.

More than 20 settlers were killed and more than 200 injured in an accident in northern occupied Palestine pic.twitter.com/RrPjixqb1n

I went to Twitter to take a closer look. I didn’t want to engage the guy, so I decided to retweet with a comment. It was my way of making a statement: Let the world see how these evil people rejoice when Jews are killed. Let the world see how even those Jews who live in cities inside the green line are reviled as “settlers.” And let the world see the way even Hassidic Jews who do not typically consider themselves “Zionist” are lumped together with the others.

To them, even Hassidim who live in cities are "settlers." They celebrate the death of Jews, irrespective of where they live. https://t.co/SnpAfPGw8u

Because it’s not about Zionists or occupation or even settlers. It’s about JEWS.

Frankly, they hate us.

But of course, just because I stood on the sidelines and commented only to my followers, doesn’t mean I stayed out of the fray. Someone with vague associations to both Hezbollah and anime (@HezBallerMisaka) attempted to draw me into a debate on the topic.

“Even in a garbage can in occupied Palestine they would still be a settler.”

So I asked him, “What are the borders of ‘occupied Palestine?’”

And he tweeted back a photo of all of Israel, draped in the colors of the Palestinian flag.

I kept going back and forth with the guy until he made some comments sufficiently antisemitic that I felt it within my rights to fill out a report. And so he stopped. But then another one of his antisemitic ilk came out of the woodwork. And maybe it was a good thing, because he drew my attention to a Wikipedia page called “Zionism” which contains the stunning lie that the link between the Jews and Israel is based only on “memory, emotion, and myth.”

I decided to go in and make an edit to reflect the truth: Jews are indigenous to Israel, linked by history and religious precepts such as the return to Zion as a precondition for the arrival of the Messiah, and the Torah commandment to dwell in the Land of Israel. It had been awhile since I had done a Wikipedia edit, but I thought I could figure it out. How hard could it be?

As it turned out, damned hard.

The first stumbling block in my way was that this particular page had been designated “extended confirmed protected,” which made me think of a certain movie.

But what it really meant was that the page was locked for editing. And as it turns out, there are only three pages in all of Wikipedia with this designation and (surprise!) two of them are about Israel.

I was almost ready to throw in the towel, but I looked a little further and found that it was still possible to request an edit, which turned out to be many, MANY hoops to jump through. For one thing, you have to learn wiki-speak. There’s all this Wikipedia-specific code you have to use. But I was determined to try.

I gathered all my sources, googled all the codes I needed, and got to work. I botched my first attempt because there’s a learning curve. But I heard back from an honest-to-goodness live editor person who said my edit request was unintelligible. I was still encouraged, because s/he hadn’t outright refused the request. I did some more editing, and am waiting to see if this edit met with the editor’s approval.

There’s always hope. And maybe I’ll be able to update this piece so that this story has a favorable outcome. You know what they say: “Hope dies last.” But let’s face it, Wikipedia is not really a fair marketplace of ideas when it comes to the Jewish people. In fact, this very same week, David Collier wrote a piece called Wikipedia – the most active spreader of antisemitism on the planet (emphasis added):

It has probably held true for a number of years that more people have their opinion shaped by Wikipedia on a daily basis – than by any other information source. I do not believe that most people fully understand the damage that Wikipedia is doing, nor the fact that action must be taken to challenge it.

When I write about Wikipedia, I always face the same three arguments:

Firstly the idea that everyone can edit Wikipedia. It is simply not true. Everyone can go onto a mundane page and make an edit – but the more important pages on Wikipedia are protected – which means only certain editors can make a change. These protections do not just stop abuse – they prevent challenges to the bias of the editors.

Collier also mentions the fact that too many people use Wikipedia as if it were a credible source, even though they know better (emphasis added):

Secondly, is the notion that because most people know Wikipedia is not a reliable source it mitigates the damage. This is a deflection. Even many of those that know Wiki is tainted, still recommend using it as a starting point – especially teachers and academics. Google, the world’s leading search engine, literally treats Wiki as the best source in the world. All those seeking information by starting on Wikipedia are still guided by the additional links that are on Wiki’s pages – and are left blind to those facts and arguments that have been airbrushed out.

This leads back to why I discovered the blatant lie on Wikipedia’s “Zionism” page in the first place. @HezBallerMisaka tweeted a screenshot (since deleted) of that Wikipedia lie as soon as I suggested that Jews are indigenous to Israel.

So it's our decision, and in reality, no one will force us to leave, and we will be safe if we decide to stay? What about Jews who can document that their descendants have lived there continuously for centuries?

At any rate, here is my edit request, for which I cited four sources (I could have found more, but I was thinking “overkill”):

Will my suggested edit make the grade?

Stay tuned. Oh--and keep in mind that whatever happens, change consists of ordinary people standing up and at least making the attempt to make a difference. I believe that, or I wouldn't be here writing this blog.

UPDATE: While the editor didn't use my (very long) suggested edit, I achieved some partial success. The sentence now reads (emphasis added): "However, other Zionists emphasized the memory, emotion and tradition linking Jews to the Land of Israel."