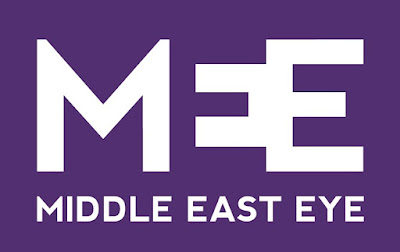 On Wednesday, both Ilhan Omar and Rashida Tlaib linked to articles in Middle East Eye in their tweets.
Tlaib, saying Israel was guilty of apartheid, linked to an article quoting a Palestinian who claims his lands were torched by Jews the previous night.
Omar linked to a completely different article about Sheikh Jarrah.
This is notable because Middle East Eye is not exactly an objective news source. It is a pro-terrorist site.
And it is linked to  the Muslim Brotherhood and Hamas.
Michael Rubin wrote in 2017:

Delving into the details of MEE, however, show that it acts far less as a traditional journalistic outlet and far more as an English-language front for Qatari-supported groups like the Muslim Brotherhood and Hamas. British corporate records, for example, show that Jamal Awn Jamal Bessasso, a former official for both Al Jazeera in Qatar and the Hamas-affiliated al-Quds TV in Lebanon, owns and operates MEE through M.E.E. Ltd.
... The Hamas links run as deep. A former official of Interpal, a United Kingdom-based charity designated by the US Treasury Department as a financial supporter of Hamas, registered the Middle East Eye website. Prior to joining MEE, [news editor Rory] Donaghy worked for organizations founded by Hamas (such as the House of Wisdom in Gaza) and the Muslim Brotherhood (Emirates Center for Human Rights, which was set up with financing and assistance from the Cordoba Foundation, a Muslim Brotherhood entity).
Bessasso, meanwhile, has openly supported radical groups. In 2012, he shared a Facebook post praising Hamas. The following year, he shared a quote from Muslim Brotherhood theologian Yusuf Qaradawi encouraging followers to utilize “violence against those who deserve it.” Over the years, the MEE has bolstered its content with “exclusive” access to Hamas, seemingly acting as the terrorist group’s preferred outlet to the English-speaking world. Hearst has penned editorials praising and defending the Muslim Brotherhood and political Islam.

The National (UAE) had an extensive investigation with similar conclusions in 2014.
Beyond those ties, there is no question that MEE is a pro-Hamas website and mouthpiece. Hamas is, of course, a US-designated terrorist group.
Two members of Congress trust and amplify articles from a pro-Hamas and pro-terror site that may in fact be owned and run by enemies of the United States.