Palestinians who demand 675,000 Jews be evicted because they are Jewish are complaining about "ethnic cleansing" in Sheikh Jarrah

The headlines from Sheikh Jarrah almost all ignore the basic facts of the issue: The buildings in question are owned by Jews and the Arab residents have refused to pay rent - even though they had agreed in a 1982 court case.
As NGO Monitor summarizes:

According to the Supreme Court, the land in question “was owned by Chief Rabbi (Hacham Bashi) Avraham Ashkenazi and Chief Rabbi Meir Orbach until the War of Independence [1948], after they purchased it in 1875 from its Arab owners.”
Subsequently, two Jewish organizations, Va’ad Eidat HaSfaradim and Va’ad HaKlali L’Knesset Yisrael, worked to register the land with British Mandatory government in 1946.
The properties were registered with Israeli authorities under these two organizations in 1973.
These organizations sold the properties to the Nahalat Shimon organization in 2003.
According to a 1979 High Court decision, and re-affirmed repeatedly in subsequent cases, as in the case of any tenant living on someone else’s property, residents living on the land owned by these organizations were required to pay rent to the organizations that owned the properties. Their failure to do so, along with instances of illegal building and illegally renting properties to others, resulted in the current legal proceedings against them, culminating in the District Court decision.
Crucially, in 1982, a number of residents- including those whose descendants appealed to the District Court- agreed in Magistrate Court that the 2 Israeli non-profits were the legal land owners.

The Arab claims that they are the legal owners have been proven to be false in court many times over the years.
Israel-haters, however, are calling evicting a few dozen illegal squatters "ethnic cleansing."
Today, the Palestinian National Council sent letters to the heads of parliaments around the world and the Inter-Parliamentary Union, demanding support to stop the "ethnic cleansing of Jerusalemites"  in Sheikh Jarrah.
Ethnic cleansing? The properties in dispute are only a small percentage of the area of Sheikh Jarrah.  This UN map shows the areas that are claimed by Jews: 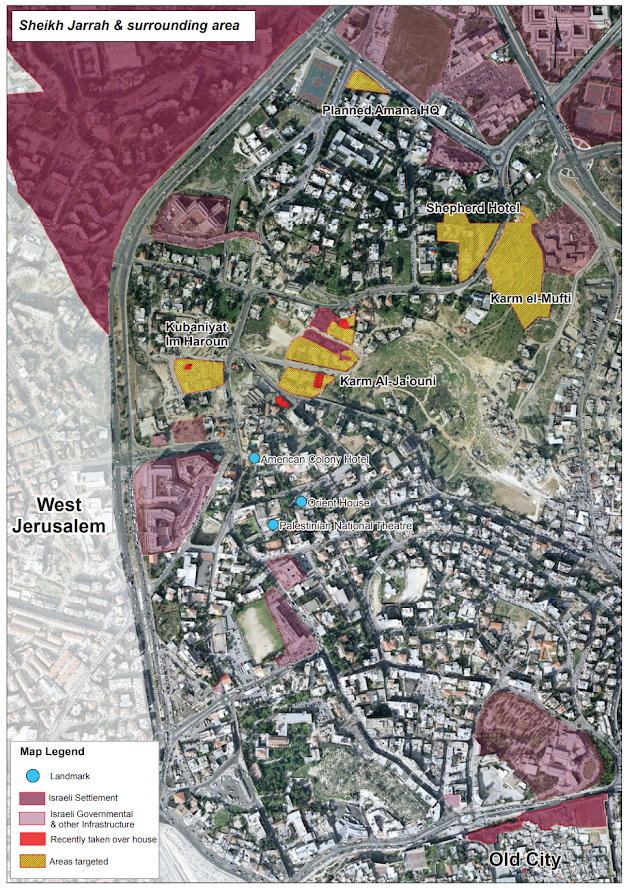 The same people who are screaming about "ethnic cleansing" of a small number of people are very clear as to their own goals: the eviction not of  dozens but of 675,000  Jews from Judea, Samaria and Jerusalem.
A large part of the world insists that the kicking out Jews - and only Jews, not Israeli Arabs - from their historic homeland, where many of them have lived all their lives, is "justice" - while evicting a few illegal squatters who refuse to pay rent is what they call "ethnic cleansing."