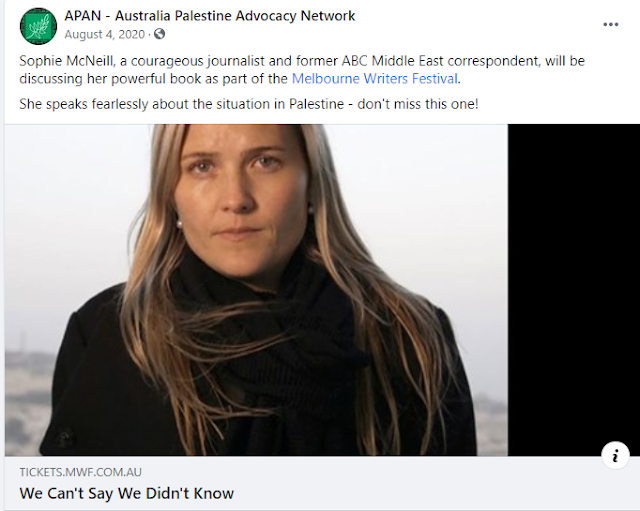 A group of dozens of international human rights activists has warned against the promotion of the left-wing Zionism, which seeks to colonize popular solidarity with the Palestinian people through presenting them as a helpless nation and attacking the resistance front against the Tel Aviv regime.
The campaigners, in an open letter addressed to the Australia Palestine Advocacy Network (APAN), warned the non-governmental organization against the decision to opt former Australian journalist and television presenter Sophie McNeill as the keynote speaker during its upcoming event, scheduled for May 23.
The activists highlighted that McNeill has encouraged the “Palestinians as victims” line at the same time as she has ferociously been attacking the anti-Israel resistance front.
They went on to describe her as a Western apologist, who attacks the resistance bloc in order to defend Washington’s divide and rule strategy, US-led military invasions, and attempts to either destroy or balkanize Lebanon, Iraq, Syria and Yemen.
The activists said McNeill now works as a researcher for the so-called Human Rights Watch (HRW), whose executive director is a prominent liberal Zionist and he frantically tries to conceal the apartheid nature of the Israeli regime by a humane mask.
Human Rights Watch regularly makes moral equivalence between Israeli massacres and resistance mounted by Palestinian groups in the face of the Tel Aviv regime’s acts of aggression, they argued.
They further noted that McNeill repeatedly made US-HRW-crafted allegations about the use of barrel bomb and chemical warfare in Syria in order to incriminate the Damascus government as well as Syrian government troops, and prolong the Syrian conflict.

Calling Sophie McNeill and the head of HRW Ken Roth "Zionists" is pretty funny. Both have been in the forefront of demonizing Israel.
Of course the names of these "activists" aren't mentioned, and I couldn't find this open letter anywhere, which means that these "international human rights activists" are Iran, which is angry that both of them criticize Iran and Syria.  (The full article makes that clearer, with praise from these "activists" for Hezbollah and Iranian terrorists.)
Elder of Ziyon at Friday, April 09, 2021
‹
›
Home
View web version