Marc Garlasco was the Human Rights Watch researcher and supposed expert on military matters who was forced out of his job in 2009 when a group of bloggers, myself included, publicized his obsession with collecting Nazi memorabilia - to the point that he wrote an entire book on the subject.
Garlasco had already used his vaunted "expertise" to blame Israel for the deaths of Palestinians who were killed by hidden Hamas ordnance on a Gaza beach. The extent of his military experience was to identify "high value" military targets for the US in Iraq, and he admits that the attacks to kill those people had a zero percent success rate  - but killed about 200 civilians!
He spent his entire time at HRW blaming Israel for being infinitely better at hitting targets then the US military while he was there.

Anyway, this supposed expert on human rights and military matters - who once said, "That is so cool! The leather SS jacket makes my blood go cold it is so COOL!" - seems to have found quite a career after leaving HRW.
The Nazi memorabilia enthusiast naturally went to the UN - and  also consulting with the US Defense Department! 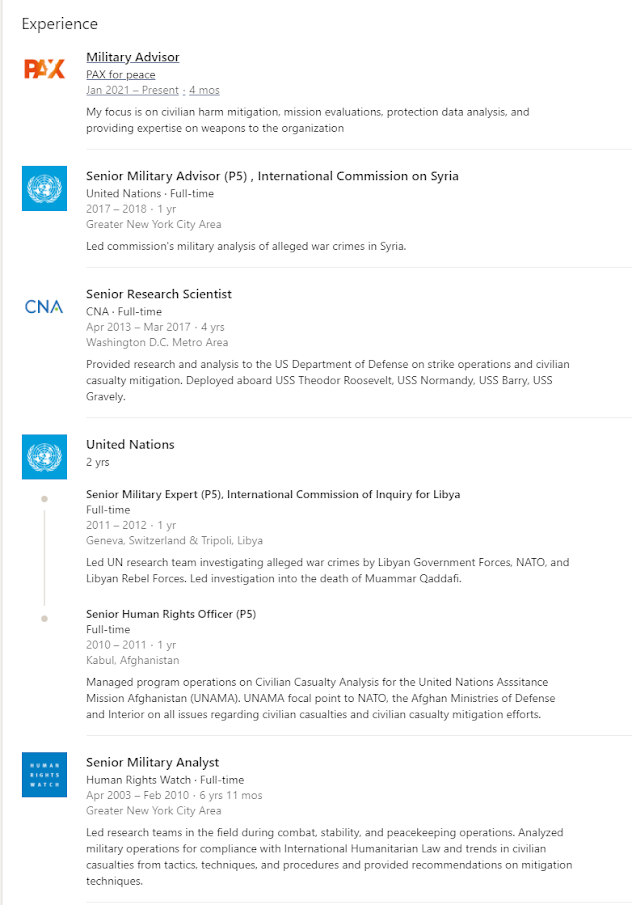 I guess that hanging out with Nazis isn't enough to cancel you when you are a human rights researcher.
(h/t MtTB)