In Israel, all Jews are family. That's what the haters want to end. 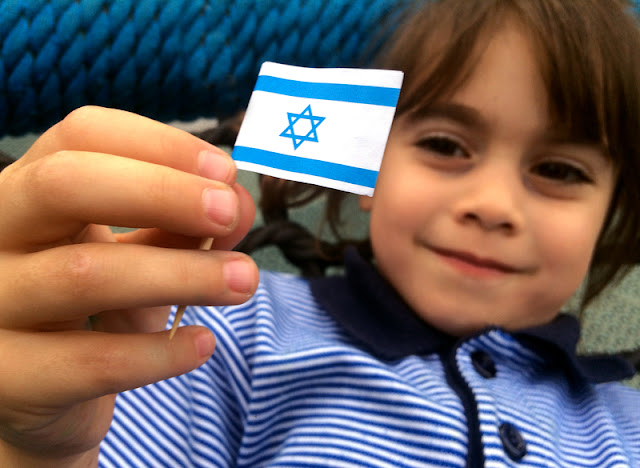 An 'only in Israel' story:  I was waiting to get an x-ray at Terem, and a mother with a baby boy (a few months old) in a stroller asked an elderly lady she clearly didn't know to watch her baby while she went in for an x-ray.

Then, the elderly lady had to go in for her x-ray, so she asks a man she doesn't know if she'll watch the child - because the boy's mother still hadn't returned.

Then, the man gets called into the x-ray room, and he then passes the baby to me.  I watched him (for about 10 min or so) until his mother finally came out.  The mother was thankful, but not inordinately so - as if I just told her what time it was, rather than ensured the safety and well-being of her infant!

Now, the funny thing is that this is not an uncommon occurrence here. I mean, don't get me wrong: on some level I'm thinking, 'wow!...she's trusting the life of her baby to complete strangers', and I couldn't imagine that happening in the US - certainly not in a big city.
But there's something about life here...you'd have to live here to know what I mean.  On some level it seemed nuts, but on another it seemed perfectly natural - the best of what this country is.

This is only one "Only in Israel" story. There are hundreds of others. Some examples:

When nobody sees anything strange in asking you how much you paid for your house or how big your mortgage on it is, or for that matter, how much you earn.
When an elderly lady stranger comes up to you while you are holding your infant child and zips up the child’s coat and says it’s too cold for a little one to be outside like that. And then she takes your cab.
When your banker tells you that you could earn 2% interest in long-term savings, or you could invest in bonds, and also her son is around your age and happens to be single, and would you like to come over for Shabbat?

There is a common denominator behind these stories.
It is because Israel is far more than a Jewish state. It is a place where Jews of all kinds are truly family.
Not a community. Not a tribe. Family.
The same familial instinct that is expressed in trusting a fellow Jew with your child is also found in starting an argument with a fellow Jew you've never met before. The sense of family explains both astonishing Israeli kindness and apparent Israeli rudeness.
As a person who still lives outside Israel, I feel it keenly when I visit. It feels like I am home. It feels comfortable. In the US, I am always on my guard, worried about any negative impression I might be accidentally making as a Jew; in Israel I feel like I can kick off my shoes and put my feet up on the coffee table without asking permission.
It is intoxicating.
I don't feel this comfortable in even the most Jewish of Jewish communities in America. They al have their standards, their cultural mores, and some people fit in and some people don't.
This is not the case in Israel, where Jews of all backgrounds, levels of religiosity and skin color are part of the same family.
Families take care of their own first. Of course, they should treat non-family members with respect, and a moral family teaches all members to be kind to others. Everyone should treat their neighbors with as much goodness as possible. But if the boat is sinking and you can only save one person, you will choose your relative. This is both normal and moral.
Sickeningly, Israel-haters try to turn this sense of family into the worst possible crime.
When they say that Jewish Israelis are "Jewish supremacists," they are saying that treating fellow Jews like family is immoral. The haters try to turn what is beautiful and moving into something ugly and racist.
They want the world to see Jewish solidarity and pride as being equivalent to thinking that non-Jews are less than human. They are echoing the worst attitude of the antisemites throughout the centuries. Most of all, they want Jews to stop acting like a family. "We don't identify with our fellow Jews, and we don't want you to, either" is the message of the ones who by accident of birth also happen to be Jews.
This is why the charge of "Jewish supremacy" is so thoroughly offensive. It isn't only antisemitic - it is an attempt to destroy what makes the Jewish people, and Israel, so special.
Israel's strength comes from the sense of family that normal, healthy Jews have for each other. Nothing can take that away.
Elder of Ziyon at Thursday, March 11, 2021
‹
›
Home
View web version