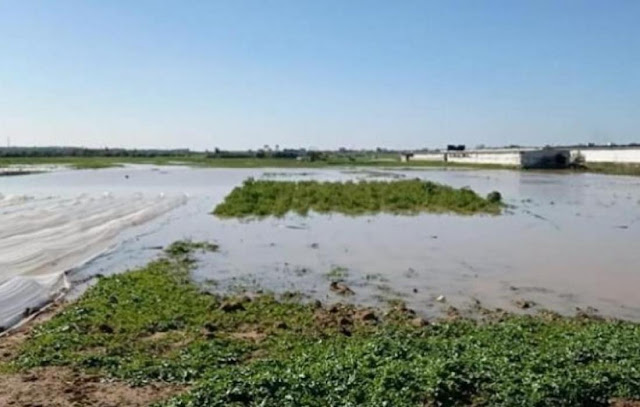 It's raining and snowing in Israel, which means that there are floods in Gaza. And whenever that happens, the Gaza authorities claim Israel is opening dams to cause the floods.
The Gaza agriculture ministry issued a statement blaming Israel for the flooding:

The spokesman for the Ministry of Agriculture in Gaza, M. Adham Al-Bassiouni, said Thursday that hundreds of dunams of agricultural land east of Shejaiya, east of Gaza City, were flooded, as the Israeli occupation forces deliberately opened gates and water dams towards their lands.
Al-Bassiouni explained, to Palestine Today News Agency that in the early morning hours, the occupation forces opened the dams towards farmers' lands, which resulted in the submersion of hundreds of agricultural dunams, which led to the destruction of agricultural crops.
He indicated that due to the bad weather conditions, the ministry's crews were unable to go to the place, indicating that after the end of the depression, a special team will go to the place to determine the extent of the damage and to report on the repeated violations of the occupation against farmers.
Al-Bassiouni stressed that his ministry will communicate with human rights and international institutions to expose the systematic crimes of occupation.

Which shows that Palestinian government, NGOs and medical professionals have no problem with lying. Yet these same officials are regularly quoted in Western media as if they are credible.