I requested a reviewer's copy but for some reason he didn't want to send it to me.
Now a couple of chapters of the book are available on Google Books so I took up the challenge to see how accurate his book is.
Not surprisingly - not very.
Besides yesterday's article I wrote, I also tweeted some criticisms.

He claims Palestinians cannot build in areas under Israeli military control.
Area B is under Israeli military control yet the PA controls building permits. So Palestinians can expand houses in some 95% of the areas they live in.
Hill clearly read this post and didn't say a word. Later, someone quoted this and called him a liar; he asked "What was the lie?" and they pointed to my post - and he didn't answer. 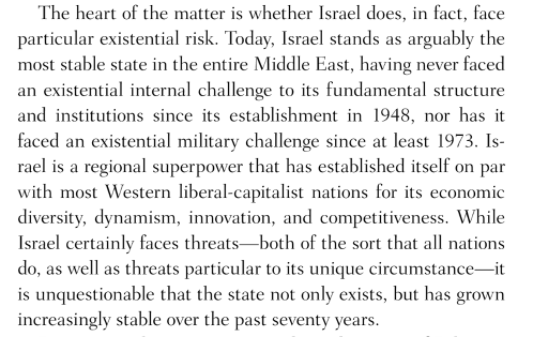 Hill says Israel has not faced an existential military threat since 1973.
Iran seeks nuclear weapons - the JCPOA is predicated on that assumption. Israel would be its main target. Sounds like an existential threat to me.
He tried to answer that he used the word "challenge" and not "threat," and he admitted Israel faces threats. But as I responded, "Oh please. The paragraph begins with whether Israel faces an existential risk. The rest of the paragraph is designed to minimize that risk without explicitly denying it.  Which is what you are doing in this tweet.....Iran poses an existential risk. You know it and tried to deflect."
The next example is particularly insidious: 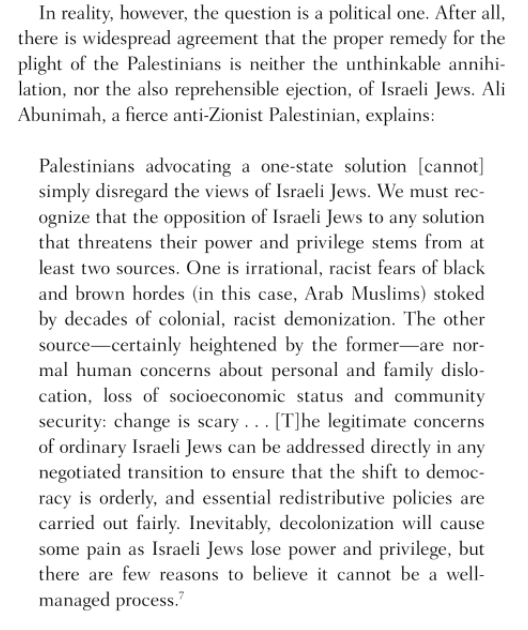 This is a very good propaganda method. Hill pretends he is trying to prove a point, that Israeli Jews do not have to worry about a single state with a Palestinian majority, by quoting Israel-hater Ali Abunimah. But in the course of quoting him, he includes a purely antisemitic statement - that Israeli Jews are racist and fear "black and brown hordes." (In fact, more than half of Israelis are people of color - and a significant number of Israeli Jews are much darker than most Palestinians.)
Since the antisemitic statement isn't the point of the paragraph and Hill isn't saying the hate in his own voice, this is a very effective way for Hill to introduce a trope of Jews as white nationalist bigots while shielding himself from charges of antisemitism.  (Of course, we know better.)
Marc Lamont Hill's main point is wrong as well. The history of Jews in Arab-majority countries is one of dhimmitude, second-class status and oppression. Abunimah is hardly the person to believe that things would be any different in a "Palestine."
One more short point: Hill claims, with no references, that the PLO's 1974 Ten Point Plan hinted their support for a two state solution.

Read it and let me know exactly where anyone can possibly get that impression, especially when it says things like "it is impossible for a permanent and just peace to be established in the area unless our Palestinian people recover from all their national rights and, first and foremost, their rights to return and to self-determination on the whole of the soil of their homeland" and "Once it is established, the Palestinian national authority will strive to achieve a union of the confrontation countries, with the aim of completing the liberation of all Palestinian territory."
Doesn't sound like there is much room for Israel in those paragraphs.
There is plenty more but they are more involved and, frankly, once it is proven that Hill is a liar, what benefit is there to prove it more times? He's a university professor and knows very well what the truth is and how to mislead people to think the opposite, as we have seen.
Hussain Abdul Hussain, not exactly a right wing Zionist, also found lots of problems in the book, and ended off with this withering paragraph:

Hill and Plitnick tried to explain “Palestine,” but instead ended up offering one radical Palestinian view. Perhaps if they were not aliens to the Middle East, they would have had a better understanding of the conflict, and of what Palestinians want. They would have also known that the Dome of the Rock is not a  “place where, as recounted in the Quran, Muhammad ascended to heaven.” The Quran does not say Muhammad ascended anywhere. If Hill and Plitnick could not get the Quran right, what else on Israel and Palestine did they get wrong?