In 1940, the  British Government of Palestine passed the "Land Transfer Regulations." It prohibited Jews from buying land in the vast majority of the British Mandate.
Here is a Jewish National Fund map from 1944 that shows the lands that it had purchased before this apartheid law, plus "Zone A"  and "Zone B" where Jews were prohibited from buying lands.
The two zones encompassed the entire Negev, all of Judea and Samaria, the Jezreel Valley, the eastern Galilee, Jaffa and parts of the coastal plain south of Haifa. 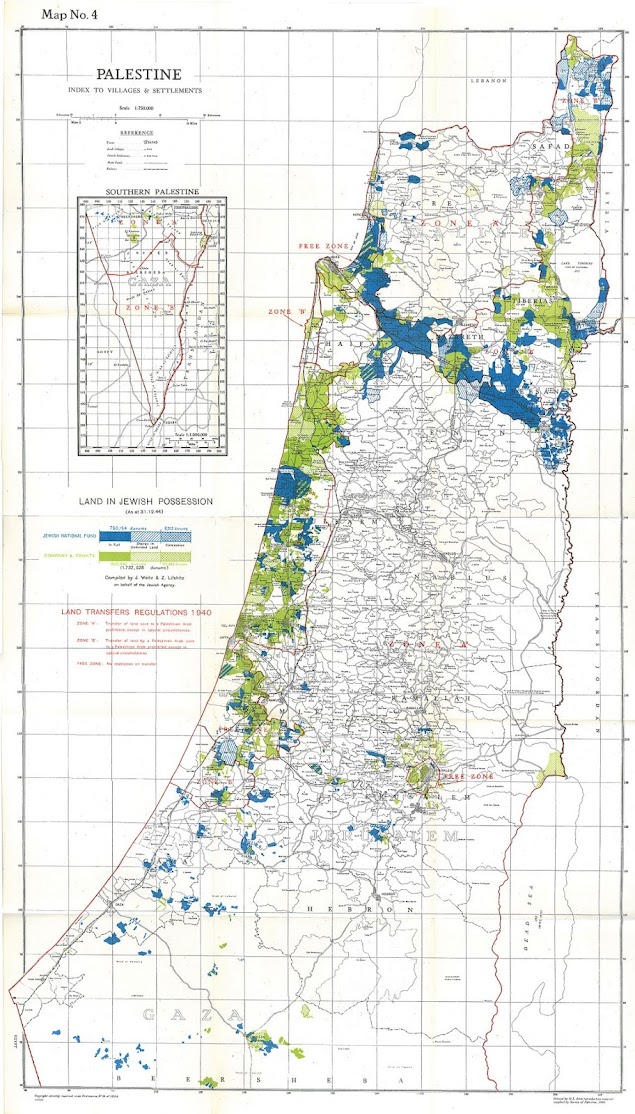 The idea that Jews cannot privately purchase land anywhere in the world is anathema to any true liberal.
Yet here we are:

A major U.S. Reform Jewish group said Friday it strongly opposes a plan by the Jewish National Fund to purchase land in the West Bank for the potential expansion of Israeli settlements in the disputed territory.
"We have long opposed the proliferation of settlements because they endanger the possibility of a two-state solution," Rabbi Rick Jacobs, president of the Union for Reform Judaism, said in a statement. "We love and support the Jewish and democratic State of Israel, which is why we will continue to strongly oppose policies that undermine the safety, security and moral character of our Jewish homeland."
According to a proposal set to be discussed by Jewish National Fund’s directorate on Sunday, it would acquire private land, with priority given to land within settlements, land where construction is expected to face few obstacles, and land adjacent to existing settlements that can be used for their expansion.
According to the Union for Reform Judaism, "In the fall of 2019, we blew the whistle and strongly criticized KKL-JNF when we discovered that they were secretly purchasing land in the West Bank. With Sunday’s planned executive committee vote this longstanding Zionist institution plans to make those purchases openly as part of the agenda of the organization’s new right-wing leadership."

Mercaz Olami, the Zionist organization of the Conservative-Masorti movement, said in a sharply worded statement "opposing the move" that it “could irreversibly endanger KKL and our homeland."

The proposed decision, the statement said, “places KKL in a situation which potentially violates international law” and as such, it said, it could “harm” the Jewish communities in the 55 countries with JNF fundraising branches.

Arabs and even liberal Jews are agreeing that allowing the Jewish National Fund to purchase lands from Arabs, who sell the land voluntarily, for top dollar, is considered illegal and immoral.
Just like 1940.
It gets even more absurd. One of the arguments against Jewish settlement in Judea and Samaria is that a small percentage of the land of these communities is on privately-owned Arab land. JNF wants to purchase those lands so the legal issues are resolved - and that is called "illegal."
How did prohibiting Jews from buying land become a moral position?
Elder of Ziyon at Tuesday, February 16, 2021
‹
›
Home
View web version