Today is International Holocaust Remembrance Day, and the Palestinian Authority has decided to celebrate it in its own Jew-hating way.
An official Palestinian TV show, "From the Israeli Archive," translates some Israeli TV documentaries for Palestinian audiences. This week, they showed (and also mistranslated) an episode from the 1981 Israeli Zionist history documentary "Pillar of Fire" which described the rise of Nazism and its effects on the Jews of Germany.
In the introduction to the episode, the Palestinian host said that the Holocaust was punishment for Zionist wickedness. 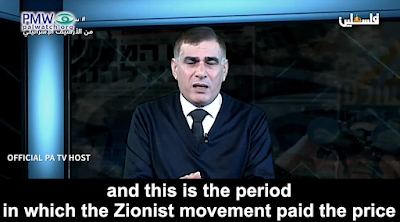 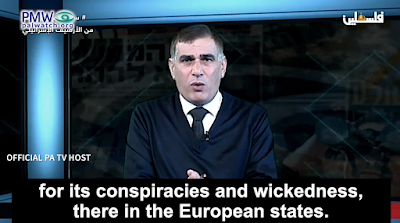 Official PA TV host: “In this episode, whose title is “Hitler’s Rise to Power in ‎Germany,” we’ll talk about the very sensitive periods between 1929 and 1935. ‎This is the period in which Zionism was diminished and nearly ended and ‎disappeared… The preparations began leading to World War II in Europe, and ‎this is the period in which the Zionist movement paid the price for its ‎conspiracies and wickedness, there in the European states.”‎
[Official PA TV, From the Israeli Archive, Jan. 23, 2021]‎

This shows not only how antisemitic the Palestinian Authority is, but also how self-centered they are to think that "Zionist crimes" were what Nazis were fighting when they murdered six million Jews.

Here is the English episode of Pillar of Fire that corresponds to the episode shown.
Elder of Ziyon at Wednesday, January 27, 2021
‹
›
Home
View web version