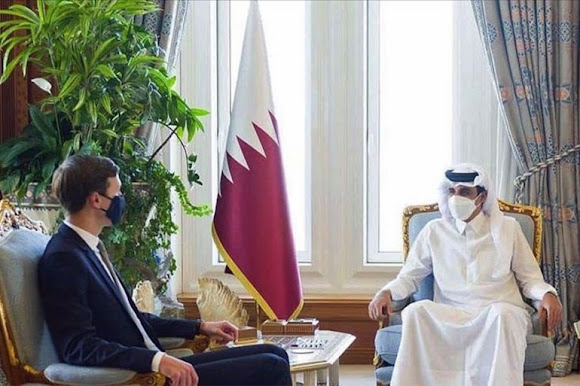 Qatar and Saudi Arabia are close to striking a preliminary agreement to end a dispute that has pitted the Gulf neighbours against each other for more than three years, sources told Al Jazeera.
The expected deal comes after United States President Donald Trump’s adviser Jared Kushner arrived in the Gulf region as part of a last-ditch effort to resolve the Gulf crisis, before the Trump administration leaves office in January.

The person who has been derided as an inexperienced, spoiled, rich real estate heir from a corrupt family who has no business being anywhere near the White House has proven to be the single most effective Middle East negotiator in history.
Here is a three year dispute that is on the way to being resolved after three days of Kushner arriving - representing a lame duck administration that can't offer any real incentives.
This comes on the heels of Kushner's key role in negotiating normalization agreements between Israel and the UAE, Israel and Bahrain and (in progress) Israel and Sudan.
Still, Kushner gets little respect from the media and practically no respect from the "experts" who have spent decades spinning their wheels in the Middle East. Even the accomplishments themselves are downplayed and minimized. His Wikipedia page is filled with vitriol - it is perhaps the most biased Wiki I've ever seen - and its brief summary of his diplomatic achievements ignores Bahrain and Sudan and frames the UAE deal as Kushner opportunistically jumping in when such a deal would have happened anyway:

After Yousef Al Otaiba, the UAE ambassador to the United States, wrote a June 2020 opinion piece warning that annexation of Israeli settlements in the occupied West Bank would threaten better relations between Israel and the Arab world, Kushner saw an opportunity and stepped in to facilitate talks. The talks led to the August establishment of diplomatic ties between the United Arab Emirates and Israel.The agreement normalized what had long been informal relations between the two countries.

To state the obvious, if any one of Kushner's diplomatic victories had occurred under a Democratic administration, he would be on the cover of magazines every week like Kissinger was during his heyday.
But it is not even conceivable that any other White House - Democrat or Republican - would have given the role to anyone who had not already been indoctrinated the failed philosophy of traditional American diplomacy. Kushner took intractable problems and found solutions that every professional diplomat was blind to.
As one UAE journalist who interviewed Kushner wrote:

Before interviewing him, I had read dozens and dozens of articles about the 39-year-old Harvard-graduate in the US media. There was a quite negative and cynical labels about almost everything pertains to him, be it his competence, skills or even personal traits. There is a prejudgment that evidently turned into a bias against him.
My impressions of Kushner that I had met were kind, humble, soft-spoken and certainly a pragmatic. Having met several heads of state, top-level officials and many celebrities from different industries throughout my humble career, I can say his composure and emotional intelligence are distinctive. His ability to understand, give and take, turn old foes into brand-new friends, and embark on missions to resolve, what many previous American leaders and top officials could not, are evident through many outcomes, lately in his role in Israel’s peace accords with the UAE and Bahrain.
It is a breath of fresh air in the Washington, Abu Dhabi, and Tel Aviv today as a chapter of the old Middle East has ended and a new one has started.

It speaks volumes that it is difficult to find this sort of analysis of Kushner's skills in US media.
UPDATE: And now Morocco!

We have lots of ideas, but we need more resources to be even more effective. Please donate today to help get the message out and to help defend Israel.
Elder of Ziyon at Thursday, December 03, 2020
‹
›
Home
View web version