If you are a BDSer who wants to celebrate Chanukah, Israeli candles are the least of your problems

Jewish Voice for Labour posted an absolutely hilarious tweet that perfectly exposes the hypocrisy  and antisemitism) of the anti-Israel Left: 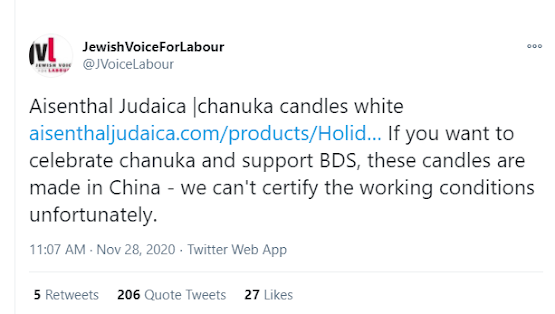 Yes, they did the legwork to find Chanukah candles that were not manufactured in Israel that British anti-Zionist Jews could buy.
And if they are manufactured in a country that oppresses and tortures a million Muslims, well, that's the price you have to pay to be moral.
There's a deeper issue here, though.
Chanukah is the most Zionist Jewish holiday there is (at least before 1948.) It celebrates a revolt for an independent Jewish state, and the holiday specifically celebrates the recapture of Jerusalem by a Jewish army and the rededication of the Jewish Temple there.
How can the people who consider the Six Day War to be a disaster celebrate Jews defeating their enemies to liberate the exact same land that Judah Maccabee redeemed 2100 years earlier?
Since they don't want to claim to be against Chanukah, they try to co-opt it into symbolizing whatever they want it to symbolize, as this page from Jewish Voice for Peace last year shows: 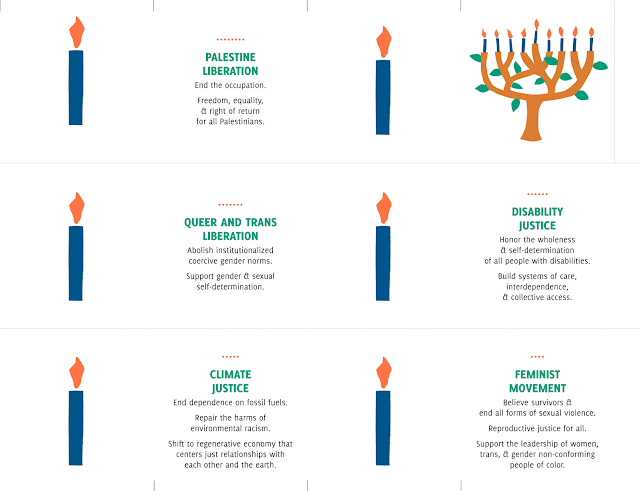 Anti-Zionists cannot celebrate Chanukah as it is, so they hijack it to become what they want it to be.
Because they are against everything that Chanukah represents.

We have lots of ideas, but we need more resources to be even more effective. Please donate today to help get the message out and to help defend Israel.
Elder of Ziyon at Thursday, December 03, 2020
‹
›
Home
View web version