US official: Trump will continue to help Israel until the last minute 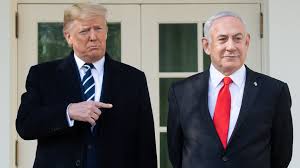 I couldn't find the original article, but Ramallah News and Ma'an quotes Israel's Kan channel in reporting that an American official says that Trump will do everything he can to help Israel until the last moment in office. (Arab media is usually accurate when quoting Israeli media.)

A US official from the administration of outgoing President Donald Trump said on Monday that the Republican president who lost the election will continue to work for Israel, until his last moments in the White House.
According to the Hebrew Kan channel, the American official, who refused to be named, stressed that Trump will continue to exploit his last moments in office, and will take advantage of the coming period for that.
He added, "We have been elected for a period of 4 years, and we intend to use the time until the last moment. We have come to work, and we have a few things that we must do with Israel, and for the benefit of Israel, and we will continue to work as well."
It is expected that US Secretary of State Mike Pompeo will arrive in Israel next week for a visit during which he will discuss with officials in Israel the new sanctions that the current US administration intends to impose on Tehran during the remainder of President Trump's term.

Elliott Abrams is in Israel now so...perhaps he is the source?

The Trump administration, in coordination with Israel and several Gulf states, is pushing a plan to slap a long string of new sanctions on Iran in the 10 weeks left until Joe Biden’s inauguration on Jan. 20, two Israeli sources briefed on the effort told me.
The Trump administration’s envoy for Iran Elliott Abrams arrived in Israel on Sunday and met Prime Minister Netanyahu and National Security adviser Meir Ben-Shabbat to discuss the sanctions plan.
...Abrams said in a closed briefing several days ago that the Trump administration wants to announce a new set of sanctions on Iran every week until Jan. 20, a source who was privy to the briefing told me.
The Israeli sources told me the planned sanctions are not connected to the Iranian nuclear program — such sanctions are more likely to be canceled by a Biden administration and open the door to reviving the 2015 nuclear deal.
Instead, the goal is to impose sanctions on Iran that are connected to its ballistic missile program, Iranian assistance to terror organizations and Iranian human rights violations.

Which would be the smart way to do it - Biden is not as likely to cancel sanctions against ballistic missile development or terrorism.
(I somehow doubt that Ken Roth of HRW will tweet happily about sanctions against Iranian human rights violations. Just a hunch.)
This is relevant to the Trump Lame Duck Test that I proposed on Friday.
We have lots of ideas, but we need more resources to be even more effective. Please donate today to help get the message out and to help defend Israel.
Elder of Ziyon at Monday, November 09, 2020
‹
›
Home
View web version