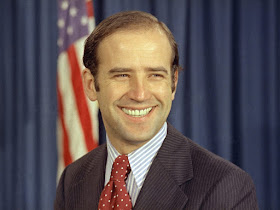 Here are some quotes and stories about Joe Biden from the 1970s relating to Israel and Jewish issues.
I'm not picking and choosing - these are all the topics I have seen in that decade.
The first is from Ma'ariv in Hebrew, the rest from JTA.
Ma'ariv, 2 September, 1973:

An American senator fears the rise of the Israeli right
Fears of the rise of the Israeli right and criticising Israel for it's "stubbornness" on the Territories - that is what US Democratic senator Joe Biden revealed in his talk with Vice Minister of Health MK Abdul Aziz Zoabi in Nazareth.
The guest added that strong Israel is the one that needs to be the first to make proposals to the Arabs on giving back the territories.
But, in his opinion, Israel is being stubborn on this issue.
Nevertheless, the American senator, known for his hardline stance on Israel, said that the US is the only one which can bring peace in the Middle East closer. He emphasized: "the oil can't be used as a political tool by the Arab states".

The Senate Foreign Relations Committee is virtually split down the middle over the proposed sale of 650 “Maverick” TV-guided missiles to Saudi Arabia proposed by the Administration.
... In a related action, Sens. Joseph Biden (D. Del.) and Dick Clark (D.Iowa) were said to have moved to bar U.S. arms sales to all countries except Israel and NATO members. Their move was apparently offered to dramatize the need to review the entire U.S. arms sales policy.

The Senate’s confirmation last night, by a 10-vote margin, of President Carter’s Middle East warplanes package, ominously portends a visible weakening of Israel’s influence at the Capitol and a commensurate growth of persuasion with the Congress that the Arab governments already have with the White House.
The consequences of the struggle between the Carter Administration and supporters of Israel are seen as encouraging the White House to take further initiatives that will create “new realities” bearing an issues such as Israel’s withdrawal from occupied Arab territories and the creation of a Palestinian “entity” for “a just peace.”
... Sen. Joseph Biden (D. Md. [sic]), who introduced the resolution disapproving the planes sales in the Senate Foreign Relations Committee last week, said the vote represented a “defeat for a sound policy, a setback for a negotiated settlement in the near future. I don’t know why Israel would move toward constructive negotiations,” he said.

Eighteen members of Congress, nine Senators and nine members of the House, were awarded the Council of Jewish Federations (CJF) Distinguished Service Award for “their continuing and unstinting support for the cause of human dignity and justice” at a reception at the Capitol Hilton this afternoon. Senators receiving the award are: Joseph R. Biden (D.Del.)....

The Soviet Union has received a new request to disclose the fate or whereabouts of Swedish diplomat Raoul Wallenberg, missing in the Soviet Union since the end of World War II. The request was made in a letter to President Leonid Brezhnev by U.S. Sen. Joseph Biden (D. Det.), head of an American Senate mission which recently visited Moscow to discuss arms reduction.
...Interviewed by the Swedish news agency bureau in Moscow, Biden is reported to have said he was personally convinced that Wallenberg was still alive and it was extremely urgent that the Soviet authorities should trace him.

Failure to make a distinction between the Palestine Liberation Organization and Palestine Arabs was cited here last night by a member of the Senate Foreign Relations Committee as a factor “in some erosion of support for past Middle East positions” even among “traditional liberal groups” in the United States. That analysis was made by Sen. Joseph Biden (D. Del.) who spoke at the opening session of an International Leadership Conference jointly sponsored by the Zionist Organization of America, the Latin American Confederation of General Zionists and the Zionist Organization of Canada at the Doral Hotel. ...
Biden told the 400 people at the opening session that the erosion of support for past Mideast positions involved changing conditions “on the domestic scene” from which U.S. Middle East policy “is not immune.” He said that “there is also genuine confusion on the part of most Americans because of their misunderstanding” of the West Bank settlement policy of Premier Menachem Begin’s government. He said “I personally stand by Prime Minister Begin’s decision in this regard.”
Declaring that “the survival of Israel is directly connected to the survival of America,” Biden said “the creation of a PLO state” in the West Bank and Gaza “is contrary to U.S. interests. As supporters of Israel we are uneasy because we have become unsure of the fundamental commitment of the American people and the lack of continuity of the Carter Administration” in its Middle East policy.
He said also that “there has been a breach among old allies — the Black and Jewish communities — and this breach runs very deep,” a reference to overtures to the PLO by some American Black leaders, including some leaders of the Southern Christian Leadership Conference which, Biden said, “is being naive about what is at stake in the Middle East.”

The Carter Administration is unveiling a massive arms program for three of Israel’s Arab neighbors that includes about $3.5 billion in credits for Egypt, up to 200 tanks of the M-60 class for Jordan, and advanced munitions for Saudi Arabia, informed sources reported.
... [Harold H. Saunders, Assistant Secretary of State for. Near Eastern and South Asian Affairs'] testimony was received with “concern and skepticism” by all of the committee’s eight or nine members present, according to the informed sources. Senators present included Committee chairman Frank Church (D.Idaho); Jacob Javits (R.NY), the ranking minority member; Paul Sarbannes (D.Md.); and Joseph Biden (D.Del.), who have expressed themselves most strongly on the central theme that delivering such quantities of new weapons to Egypt would risk a duplication of the U.S. error in calculating the Shah of Iran would be a powerful and unshakable ally by supplying his government with a huge arsenal.

(h/t Yoel for Maariv quote)
We have lots of ideas, but we need more resources to be even more effective. Please donate today to help get the message out and to help defend Israel.
Elder of Ziyon at Monday, November 09, 2020
‹
›
Home
View web version