There was a very telling tweet by the formerly prestigious ACLU in response to Mike Pompeo: 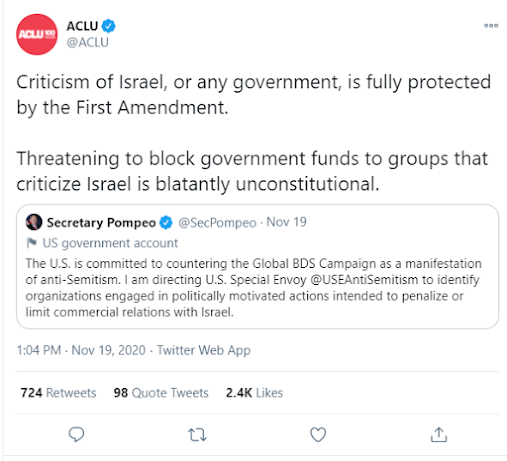 Pompeo is talking about boycotting Israel. The ACLU is answering about "criticizing Israel."
Boycotts aren't criticisms by any definition. They are actions.
We see this all the time. The IHRA's Working Definition of Antisemitism specifically excludes criticism of Israel similar to that of any other country as being antisemitic, yet virtually every article against that definition says that it calls criticism of Israel antisemitic.
These lies are deliberate. The liars know they are lying. They want to change the framing of the argument into something they can win, by pretending that Israel's supporters are saying something they never say.
Why do they do this? There's only one reason:
They are defending Leftist antisemitism.
They know that they cannot defend treating Israel with double standards, or delegitimizing Israel, or demonizing Israel, because it shows that they are hypocrites when they consistently find only Israel to be uniquely evil. They know that boycotting Israel is meant to tell the world that Israel is the only nation whose crimes make it worthy of boycotting.
The IHRA definition is the best definition there is, but they want to continue to call Zionism "racism" and to compare Israel to Nazis and to call a nation with 20% non-Jews with full rights an 'apartheid state."  They know that if their criticisms of Israel were fair and accurate, the world would yawn - Israel does no worse, and significantly better, than most nations in war time.
So in order to defend the indefensible, they blatantly lie and say that this demonization, this only boycotting Jewish businesses and Jewish entertainers and Jewish speakers, this insane need to call Jews, and only Jews, Nazis, is merely "criticizing Israel."
They know they are lying. They refuse to respond when called out on it.
The tweet above is an explicit attempt to change the framework of the discussion away from what Pompeo said into an indefensible straw man.
One only does that when they know they have lost the argument.
We have lots of ideas, but we need more resources to be even more effective. Please donate today to help get the message out and to help defend Israel.
Elder of Ziyon at Tuesday, November 24, 2020
‹
›
Home
View web version