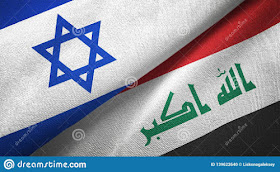 I have never heard of this JaFaJ site before, but it looks like a sober intelligence site and doesn't have any crazy conspiracy theory stories that I can find.

Iraqi Officials Have Already Visited Jerusalem
JaFaJ Intelligence has confirmed that senior Iraqi officials have been engaged in peace talks with their Israeli counterparts for over a month. The talks, from the Iraqi side, involved senior official from the Prime Minister’s office, and are being facilitated under direct supervision of Jared Kushner, the President’s Middle East Advisor.
Iraqi sources have also confirmed that peace with Israel was one of the key reasons behind the Iraqi Prime Minister’s visit to Washington DC and his meeting with President Trump in August 2020.
JaFaJ Intelligence sources have also confirmed that the Iraqis have exhibited a sincere desire to reach a peace deal with Israel. The talks have been held between the parties in Jerusalem and the United States, with one Iraqi delegation visiting Israel last September under a shroud of total secrecy to meet with officials from the Israeli Prime Minister’s office.
This is important because the intelligence community knows that the Iranian government controls the jobs of most senior Iraqi government officials, and that they are members of the Shiite sect. Therefore, it is well reasoned that the Iraqi government would have never made such a move without full Iranian consent.
What is most surprising about this development is that JaFaJ Intelligence sources in Iraq have confirmed that “Iran is supportive of the negotiations”.
Facially, this statement may seem outlandish to an outsider looking in, but nonetheless, President Trump himself mentioned something about Iran when he spoke about the Sudan-Israel peace deal during a recent rally. During that speech, he implied that the deal was so good, that Iran may eventually join in.
Plagued by ruthless economic distress and unforgiving American economic sanctions that are crushing the country, Iran found itself under immense pressure from inside and outside the country, in a nation where riots have become regular happenings since 2019. Bankrupt, weakened, crushed and losing ground, the Iranian regime may not survive unless it gets a break from these sanctions.
With the elections in mind, Iran has had hopes that Trump would not win re-election and would restore the Iran Deal, giving it a break. Nonetheless, the Iranians have been forced to take this position when they received confirmation from Chinese officials that “Unfortunately, Trump is going to win, because he has the American Middle Class behind him”.
Since then, Iran has been trying to minimize its damages by helping to “broker a peace deal between Iraq and Israel”. The Iranians have gone as far as to assure the Americans (through a third party), that they could not only secure support for the peace deal from Iraqi’s Shiite religious leaders, but even have them issue Fatwas legitimizing it.

This does not seem so far fetched as I have been documenting Iraqi media showing interest in peace with Israel, and it seems unlikely that such articles would be written without an Iraqi government green light.
(h/t Yoel)
We have lots of ideas, but we need more resources to be even more effective. Please donate today to help get the message out and to help defend Israel.
Elder of Ziyon at Sunday, November 01, 2020
‹
›
Home
View web version