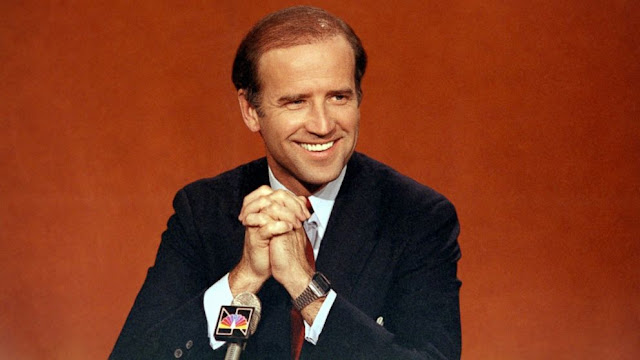 Continuing on on reporting by JTA that quotes Joe Biden...
November 13, 1984:

U.S. policy in the Middle East is based on myth, a leading member of the Senate Foreign Relations Committee charged here yesterday.
Sen. Joseph Biden of Delaware, the second ranking Democrat on the committee, said the “three myths” which “propel U.S. policy in the Middle East” are “the belief that Saudi Arabia can be a broker for peace, the belief that King Hussein (of Jordan) is ready to negotiate peace, and the belief that the Palestine Liberation Organization can deliver a consensus for peace.”
Biden addressed the 59th anniversary convention of the Herut Zionists of America at the Hotel Pierre. The two-day gathering closed last night. The Senator, who was re-elected to a third six-year term last week, told the convention delegates, “My first order of business in the new Senate will be to educate my colleagues on the financial sacrifices Israel has made as a result of Camp David.”

A leading member of the Senate Foreign Relations Committee proposed Sunday night that the U.S. refinance Israel’s debt, as it has done for other countries in severe economic straits.
Sen. Joseph Biden of Delaware, the second ranking Democrat on the Committee, said he and Sen. Daniel Inouye (D. Hawaii) would draft a refinancing plan for Israel when the new Senate goes into session next month. Biden spoke at the Annual Metropolitan Dinner of the Zionist Organization of America here.
He noted that the U.S. has been able to refinance the debt service of other economically troubled nations such as Mexico, Nigeria and Argentina. He also chided those who complain that the U.S. provides excessive economic and military aid to Israel. "The U.S. spends over $100 billion a year on NATO and worries about spending $2.7 billion on Israel," he said.
Biden, long one of Israel’s staunchest friends in Congress, observed "that the consciousness of guilt" over what America left undone to prevent the Holocaust "does not exist for most of the younger generation. America’s most articulate spokesmen for Israel are gone, replaced by men and women with no institutional memory," he said.
"The security of every Jew in the world is tied to Israel. If Israel dies, Judaism will be in jeopardy," the Senator said, adding, "but I am confident that Israel and Judaism will survive."

When the Senators were asked about the growing influence of Arab-Americans on Capitol Hill, Biden replied they were not the main reason that supporters of Israel had lost some fights in Congress, such as the sale of AWACS to Saudi Arabia in 1981. He said one reason is that there are no more “giants” in the Senate like Sens. Hubert Humphrey (D. Minn.), Henry Jackson (D. Wash.), Jacob Javitz (R. NY), and Frank Church (D. Idaho) who could sway the Senate with their moral force.

Biden said the major power that helped force the AWACS sale through the Senate was the large corporations with “significant economic investments” in Saudi Arabia and other Arab countries. He said they brought pressure upon Senators opposed to the sale from larger corporations well as from small companies on the local and state level. He stressed that “economic muscle” still plays a major role in foreign policy.

Sen. Joseph Biden (D. Del.), who spoke briefly from the reviewing stand [of the Salute to Israel Parade in NYC], declared that today’s Salute to Israel Parade “is the answer to Bitburg.” He was referring to the German war cemetery in Bitburg, West Germany where, to the anguish of Jews and non-Jews, President Reagan will lay a wreath next month at the graves of German soldiers who fought in World War II, including members of the notorious Waffen SS.

Sen. Joseph Biden (D. Del.) asserted Tuesday that a bill that would have reduced Israel’s debt to the United States by $3.5 billion was postponed in the Senate last December in the wake of the arrest of Jonathan Pollard for spying for Israel.
A bill that would have passed was withdrawn within 24 hours of Pollard’s arrest because “American public opinion shifted dramatically,” Biden told the nearly 3,000 young Jewish leaders attending the closing session of the United Jewish Appeal’s Fifth National Young Leadership Conference.
...
Biden charged that for the past two Administrations there has been a lack of “a comprehensive foreign policy” for the Middle East. He said this has allowed American public opinion to move out of focus and thereby become susceptible to reducing its commitment to Israel.
In addition, Biden noted that where Israel was once considered the “David” of the Middle East, it is now viewed as the “Goliath.” Biden also claimed that while a former generation of Jews and non-Jews viewed Israel as a moral issue because of the Holocaust, younger Americans do not.
He said the U.S. must announce that Israel is an ally and treat it like one, keeping any differences in private and not making public criticism of Israel.
Biden stressed that the strategic importance of Israel, to the United States should also be pointed out. We don’t apologize for our $100 billion commitment to NATO,” he said. “Why the hell should we apologize for a $3 billion commitment to Israel.”

We have lots of ideas, but we need more resources to be even more effective. Please donate today to help get the message out and to help defend Israel.
Elder of Ziyon at Thursday, November 12, 2020
‹
›
Home
View web version