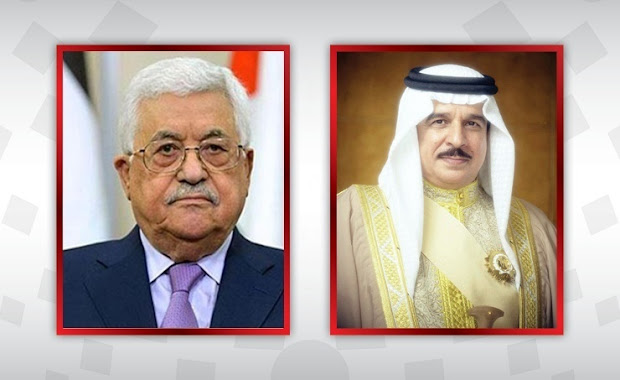 President of the State of Palestine, Mahmoud Abbas, received this evening, Sunday, a phone call from the King of Bahrain, Hamad bin Isa Al Khalifa .
During the call, the King offered his condolences on the death of the great fighter, Secretary of the Executive Committee of the Palestine Liberation Organization, Saeb Erekat.
In turn, the President offered condolences to King Hamad bin Isa, on the death of the Bahraini Prime Minister Prince Khalifa bin Salman Al Khalifa.

Here is how Bahrain's news agency wrote about this:

They don't say who called whom, and they switch the order of the conversation to prioritize condolences over Khalifa first and then Erekat.
Erekat died on November 10.
Prince Khalifa died on November 11.
The phone call took place on November 22, an exceptionally long time after both deaths to offer condolences.
This looks a lot like a game of diplomatic chicken, with each leader wanting the other to call them first to offer condolences so they feel more powerful and force the other into a position of subservience. In this case, Abbas "won."
Here we have the stupidity of the honor/shame culture in full view.
We have lots of ideas, but we need more resources to be even more effective. Please donate today to help get the message out and to help defend Israel.
Elder of Ziyon at Monday, November 23, 2020
‹
›
Home
View web version