I've reported about the strange scene of Israeli, including Jewish, police protecting delegations of Gulf Arabs from angry Palestinians at the Temple Mount - which is doubly ironic because to Jews, any Muslims who visit the area are desecrating it.
This has not gone unnoticed in Arabic media.
Arabi21 has an op-ed bemoaning this state of affairs, which was translated by Middle East Monitor: 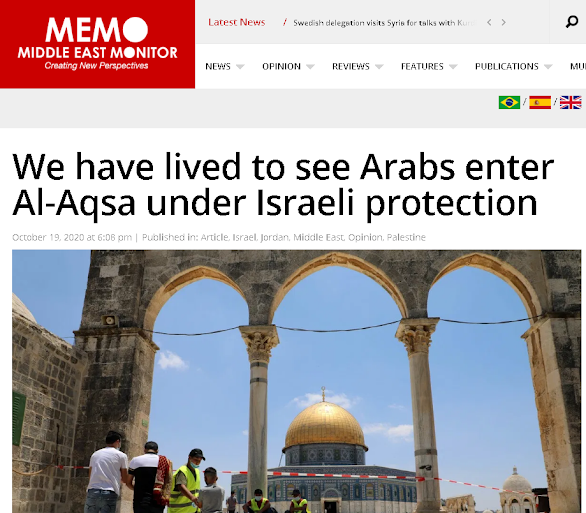 We have lived to see Arabs enter Al-Aqsa Mosque under Israeli protection. It is shameful.
Is there any real difference between an Arab delegation visiting Al-Aqsa Mosque under Israeli protection and hordes of extremist Israeli settlers whose incursions and practice of Talmudic rituals there take place under the protection of the same security forces? The crime of these Arabs is arguably greater.
The storming by Israeli extremists under the guns of the Israeli occupation does not whitewash the image of the occupation in the eyes of the world, nor does it give it legitimate sovereignty over the Noble Sanctuary of Al-Aqsa. The Arabs’ visit does, however, whitewash the image of the military occupation and is “evidence” that all Muslims can go to Al-Aqsa Mosque. It also shows the world the false image of Israel providing protection for religious sites and allowing religious freedom.

Left unsaid is that the Waqf has already said that they would ban Gulf Arabs from visiting Al Aqsa, which proves the exact point that it really is Israel that is safeguarding full access to the Temple Mount, blocking only those who would try to stop others from visiting.
The only reason any Arabs need Israeli protection to visit the site is to save their lives from the hateful Palestinians who would lynch them if they could.
In fact, an Emirati tweeted the video I published yesterday of Palestinians harassing Gulf visitors to the site with the caption, "Thank God that Jerusalem is in the hands of the State of Israel."
We have lots of ideas, but we need more resources to be even more effective. Please donate today to help get the message out and to help defend Israel.
Elder of Ziyon at Tuesday, October 20, 2020
‹
›
Home
View web version