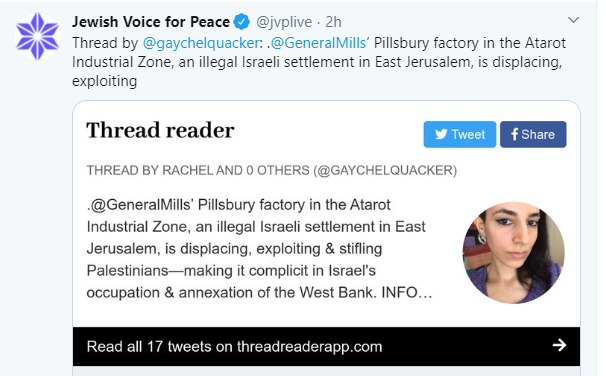 Jewish Voice for Peace tweeted a Twitter thread claiming that the General Mills factory in Atarot "is displacing, exploiting & stifling Palestinians."
The "evidence" given for this is laughable, but Israel-haters don't care much about facts.
What follows is a litany of half truths and selective facts that have nothing to do with the General Mills Pillsbury factory.

Pillsbury opened in Atarot in 2002, just after Israel built its apartheid wall around the whole zone. The wall & its checkpoints, visible from the 160 businesses they encircle, are a constant reminder of how Atarot helps Israel dominate Palestinian lives, livelihoods & land.

The security barrier was build to stop Palestinian suicide bombings that was killing hundreds of Israelis a year, not to show Israel domination over Palestinian lives.

The Pillsbury factory also employs Palestinians, a fact General Mills leaned on in its PR statement after the UN determined that the factory’s operations violate international law. But Palestinian settlement workers endure exceptional exploitation, precarity & restrictions. Because the Atarot Industrial Zone ravaged & suppressed pre-existing Palestinian agriculture & small businesses, local Palestinian workers—often the immediate descendants of the rightful owners of the land—have no choice but to labor in factories like Pillsbury’s.

Palestinians' jobs can be grueling & unsafe—and, under Israel’s apartheid legal system, they often have fewer labor protections, lower wages & negligible benefits compared to Israelis in the same workplace. In an occupation-strangled economy, they accept this to survive.

50% of the Pillsbury plant's employees are Palestinian Arabs. And Palestinians who work in Israeli industrial zones generally make double the salary they could make in their own communities. It isn't like they have no choice - they eagerly choose to work for Israelis.
Are their jobs without worker protections? Israeli law says that they must be afforded the same protections as anyone else. It is true that some Israeli bosses take advantage of some Palestinian workers, but there is no evidence that General Mills does - in fact, General Mills Middle East was named one of the Best Places to Work in Asia.

The chasm between Palestinian & Israeli workers in Atarot has only widened during COVID-19. Ex: due to fear of checkpoint closures—and to union bust—a manager forced Palestinians to sleep in a trash-sorting plant in squalid & infectious conditions while Israelis went home.

I don't know how true that Haaretz article is, but it has nothing to do with General Mills.

Pillsbury increases Atarot’s heavy pollution, which exceeds “permissible levels” 2/3 of the year. Many Palestinian locals have respiratory issues from flour inhalation. One said “when they pour the flour [in outdoor mixers], the flour… overflow[s] into the house.”

Atarot's pollution problems from 2016 all came from cement manufacturers, not flour. Only this year the Ministry of Environmental Protection temporarily closed two factories in Atarot for air pollution - but not General Mills.
As far as the anecdote of Pillsbury flour spilling into houses, this is absurd. There are no houses adjacent to the factories.  It was a typical statement that would not be checked by anti-Israel NGOs.
We have lots of ideas, but we need more resources to be even more effective. Please donate today to help get the message out and to help defend Israel.
Elder of Ziyon at Tuesday, September 22, 2020
‹
›
Home
View web version