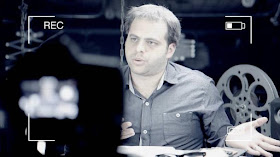 Abdulrahman Thaher is a Palestinian actor and film director.
On August 14, he posted on Facebook a very mild and indirect criticism of the Palestinian Authority, saying that he didn't want to comment on the Israel/UAE agreement but that the PA had no right to criticize it since they have maintained recognition of Israel for decades.
He was then promptly arrested on charges of "defaming the Authority."
Last Wednesday his detention was extended and on Sunday the Palestinian court rejected an argument that what he did was not illegal under Palestinian law.
Thaher's wife said he looked "sick and confused" during his court date and added that he was hospitalized, but she wasn't allowed to visit him.
At the same time, another Palestinian critic of corruption in the Palestinian Authority, Nizar Banat, was also arrested for the same "crime "of "defaming the Authority."
Western media and human rights groups have not said a word about these two cases, days after the Palestinian Independent Commission on Human Rights criticized the arrests.
Many Palestinian media outlets steer clear of reporting such cases, but Hamas and some independent media have been reporting it, and there is lots of interest on social media. The arrests are no secret. Reuters even reported about it in its Arabic newsfeed.
The only reason the Western media is reluctant to report on such stories is because they want to maintain their anti-Israel bias. If the Palestinian Authority is revealed to be the corrupt dictatorship it is, then public opinion would swing more towards Israel which is far better in every single metric of adherence to the law and of morality. It would upset the false "narrative" of oppressive Israel and its Palestinian victims.
We have lots of ideas, but we need more resources to be even more effective. Please donate today to help get the message out and to help defend Israel.
Elder of Ziyon at Thursday, August 27, 2020
‹
›
Home
View web version