How can you report about Arabs hating sympathetic Jewish characters on TV shows without mentioning antisemitism? The @NYTimes can. 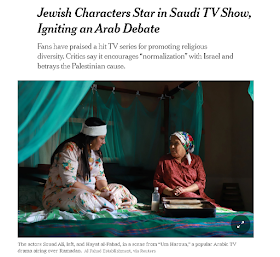 A week and a half after I first reported on the controversy in the Arab world over a Ramadan mini-series that was sympathetic to Jews, the New York Times finally caught up:


In a mud-walled village in the Persian Gulf, a Christian woman sheds tears of love for a Muslim merchant. But he is stuck in a miserable marriage to a woman who longs for another Muslim man. But she can’t have him, because he is crazy about the local rabbi’s daughter.

These tangles of interreligious intrigue unspool in a new blockbuster television series that has set off heated debates across the Arab world about the region’s historical relationships with Jewish communities and the shifting stances of some of its current leaders toward Israel.

Fans laud the program, set in the 1940s and 1950s, for highlighting an often overlooked aspect of the region’s past — Jewish communities in the Persian Gulf — while providing a much-needed example of coexistence among different faiths.

But critics have blasted it as a blatant effort to reshape Arab views of Israel to pave the way for formal relations, or what many in the Arab world call “normalization.”

Throughout the entire article, the idea of "normalization" was discussed dispassionately, without ever mentioning that people hating a TV series that is about Jews, not Israel, are by definition antisemites.

The NYT article investigates whether Saudi Arabia might have pushed the series concept as a way to get the Arab world to accept Israel. And perhaps they did. But the critics of the show are hating the Jewish characters, not any Zionist characters.

Arab antisemitism remains one of the things that cannot be mentioned in mainstream media, even when that is the topic of the article. The show itself tackles Arab antisemitism - but the New York Times cannot. It holds onto the fiction that Arabs only hate Zionists, not Jews.

The reporter was perhaps unfamiliar with the reaction of the show by Juliet Awad, a Jordanian Palestinian actress, who criticized Umm Haroun for its "normalization" - and then said it was financed by the Jews who run Hollywood. "The Jews use their money to serve their cause. There are millions pumped into financing music, films and theater to improve the image of the occupation in the eyes of the world," she said. And when asked why such a film about antisemitism shouldn't be shown, she said that antisemitism was a myth.

Jordanian singer Youssef Kiwan (who does not seem to be very popular) also railed against the show, saying,  "Artistic normalization is the most dangerous type of normalization ever, because it is associated with lasting and immortal works."

He went on, “The artist who sells his conscience and betrays trust, and spreads poisoned thought after penetrating our homes without permission through his artwork, is much more dangerous than others.”

He called on Arab governments to censor such ideas, and for performing artist unions to blacklist anyone who dares act in such a work as Umm Haroun.

You don't see too many artists who support censorship and blacklisting - but when the film is sympathetic to Jews, then these become not only acceptable but mandatory.

Another prominent artist also came out against the miniseries - Egyptian Mohamed Sobhi, who produced and starred in the "Knight Without a Horse" miniseries based on the Protocols of the Elders of Zion!

Make no mistake: those who rail against "normalization" with Israel are antisemites, period. Their loathing for Umm Haroun betrays their true feelings. They couch their hate of Jews into political language that doesn't fool anyone.

Except, perhaps, The New York Times.


We have lots of ideas, but we need more resources to be even more effective. Please donate today to help get the message out and to help defend Israel.
Elder of Ziyon at Sunday, May 03, 2020
‹
›
Home
View web version