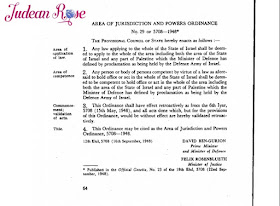 Sovereignty is not the same thing as annexation. Prime Minister Netanyahu knows this, which is why he is always careful to speak of exercising Israel’s sovereignty over Judea and Samaria and in the Jordan Valley. The media never seems to see this as a serious distinction, and often cites Netanyahu as speaking of “annexation,” as in this April 26, 2020 Jerusalem Post piece, “Netanyahu: I’m confident annexation will happen in a couple of months.”
In fact, Netanyahu never did say that, which the body of the same article makes clear. “Three months ago, the Trump peace plan recognized Israel’s rights in all of Judea and Samaria,” the article quotes Netanyahu as saying. “President Trump pledged to recognize Israel’s sovereignty over the Jewish communities there and in the Jordan Valley. In a couple of months from now, I’m confident that pledge will be honored, that we will be able to celebrate another historic moment in the history of Zionism.”
You don’t see the words “annex” or “annexation” in the above quote. You don’t see them there, because to speak of annexation would be to suggest that Israel is taking land that belongs to others and adding it to the State of Israel. Instead, the prime minister says clear as day, Judea and Samaria and the Jordan Valley are Israel’s lawful territories. They already belong to Israel, are part of Israel. And the U.S., under President Donald J. Trump has pledged to recognize this fact.
The difference between sovereignty and annexation is not just a question of semantics, but of two quite different actions. Writers that insist on using the “a” word strengthen the trope that Israel is an occupier of someone else’s land, that we acquired the land through aggression.  And that’s not fair. Or unbiased.
It’s propaganda. It tells the world that Israel is a thief. Which is not the case.
It is true that Israel, for instance, kept the official status of Judea and Samaria vague from 1967, hoping that by leaving something on the table, there would be something left to negotiate, for peace. But that doesn’t mean we didn’t always see these territories as belonging to anyone but Israel, ever.
And in fact, the status of Judea and Samaria and the Jordan Valley as part of Israel isn’t just a matter of how Israel sees things, but a matter of international law and domestic Israeli law, too. There’s the December 23, 1920 Boundary Convention, as well as the subsequent Demarcation Agreement of 1923, (see: https://en.wikipedia.org/wiki/Paulet%E2%80%93Newcombe_Agreement) which protects these borders, and which were enshrined by Article 5 of the Mandate for Palestine which says these territories may not be ceded. Under Israeli law, there is the 1948 Area of Jurisdiction and Powers Ordinance, which states that any territory in the Land of Israel that is entered by the IDF, is declared to be under Israeli control and automatically comes under Israeli rule of law, every bit the same as for Tel Aviv: "Any law applying to the whole of the State of Israel shall be deemed to apply to the whole of the area including both the area of the State of Israel and any part of [Mandate] Palestine which the Minister of Defence has defined by proclamation as being held by the Defence Army of Israel." 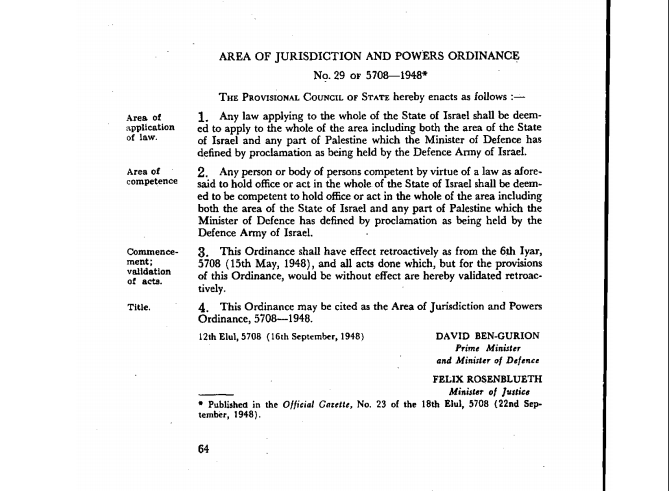 The only thing missing is for Israel’s Minister of Defense to now declare these territories under Israeli control and to apply civilian law. In short, all that is needed is the declaration—to say: these are our territories—and to exercise the rights that attend that declaration by ending the state of martial law.
The fact that the United States, under Donald J. Trump, has agreed that this is so, underscores a point the media refuses to absorb: Israel has never engaged in an illegal occupation, and has every right to this territory, and has always had that right. It is ours and will always be ours. The U.S. declaration is by way of recognizing Israeli law, something some journalists can’t seem to bring themselves to do.
As I write this on the eve of Israeli Independence Day, I can’t help but think how good it would be for Israeli journalists to finally understand this—yes, even those who write for the supposedly pro-Israel Jerusalem Post—and stop spreading propaganda for the other side with misleading headlines. There really is a difference between exercising sovereignty and annexation, and I say vive la différence.
We have lots of ideas, but we need more resources to be even more effective. Please donate today to help get the message out and to help defend Israel.
Varda Meyers Epstein (Judean Rose) at Wednesday, April 29, 2020
‹
›
Home
View web version