Ah, psychological projection. One of my favorite topics in the early years of the blog, and it still holds true for Arab critics of Israel. 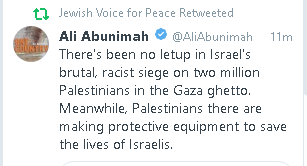 As the article he links to shows, clothing factories in Gaza - which have been steadily increasing their exports because Israel has been loosening restrictions on Gaza exports in recent years - were forced to shut down when the pandemic hit. Some 6000 workers lost their jobs.

Nope, it isn't Israel that hates people without reason. It is people like Abunimah who do that.

Also recently, Haaretz published a "review" of Fauda written by a Palestinian named George Zeidan. Some of his criticisms about accuracy are 100% true, and I am a little surprised that the director and writers didn't do proper research.

But then he wrote this:

This leads me to my biggest problem with the show. Every chance that they have, Fauda’s writers present the Israeli commandos as personally and operationally principled, lingering on their deep concern for protecting the civilians of Gaza, going out of their way to fulfil their promise to the family of the Palestinian informer who supported them. They aren’t shown shooting or killing any Palestinian women or childen. [sic]

So it is unrealistic for the actors playing undercover agents in Gaza to use the word "habibti" to a young woman they do not know, but it would be realistic for them to blow their cover by sometimes randomly murdering women and children for no reason? Because, of course, Zeidan and Haaretz know that this is the truth.

But this is Fauda’s war on truth. All the data shows that the opposite is true. According to the United Nations Office for the Coordination of Humanitarian Affairs (OCHA) in relation to just one of the Israel-Hamas conflicts, the  2014 Gaza war, 2251 Palestinians were killed, of which  1462 were civilians 551 were children and 299 were women. Israelis need to know the unvarnished truth: that their army is responsible for killing all these civilians, and to recognize the chasm between those deaths, their perpetrators and Fauda’s fantasy soldiers.

Well, except for the fact that many of the children killed were human shields for their terrorist relatives, although some were accidentally killed by secondary explosions and the like.

Zeidan is portraying Israeli soldiers - meaning most Israelis - as bloodthirsty and eager killers based on poor reporting from a war 6 years ago. He hasn't compared Israel's record of avoiding civilian casualties in urban areas with that of any other army in history. He just "knows" that Israelis randomly murder women and children for no reason.

Which means that Zeidan is guilty of what he is accusing Israelis of being - someone who hates a group of people for no reason and with no proof, but just because.

Projection is alive and well.


We have lots of ideas, but we need more resources to be even more effective. Please donate today to help get the message out and to help defend Israel.
Elder of Ziyon at Tuesday, April 28, 2020
‹
›
Home
View web version