Ramadan. A time for spirituality and contemplation. And, of course, if you are a member of Hamas, for terror and violence.

Hamas' Al Qassam Brigades has listed nearly 40 separate events that happened on Ramadan in its never ending war against Israel, including some major terror attacks like the twin suicide bombings on Ben Yehuda Street in Jerusalem on December 1, 2001 killing 11 (Hamas claims 22) and a bus bombing the day after in Haifa that killed 15 (Hamas claims 16.)

Here are the victims: 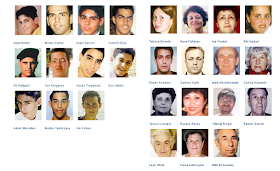 Interestingly, Hamas also is proud that they started the 2014 Gaza war on Ramadan. Just like the 2009 Gaza war, the Western media always dates these wars according to Israels' reactions to Hamas acts of war, not to Hamas' acts to begin with. Here we see Hamas saying:

Ramadan 10, 1435/July 7, 2014
Al-Qassam Brigades launches the "Battle of Consumed Straw" in the face of (Al-Jarf Al-Samid), during which it revealed many surprises and carried out operations behind the lines and captured a number of enemy soldiers.

That same day they shot some rockets towards Tel Aviv, Jerusalem and Haifa and called it the "Tenth of Ramadan Operation" - because the Egyptian/Syrian attack that started the Yom Kippur War was also on the tenth of Ramadan. (Egypt still refers to it as the Ramadan War.)

Why does the media always say Israel starts wars, and date the wars from the time of Israel's reactions, when the Arabs themselves are happy to take credit for starting them?

We have lots of ideas, but we need more resources to be even more effective. Please donate today to help get the message out and to help defend Israel.
Elder of Ziyon at Tuesday, April 28, 2020
‹
›
Home
View web version