Palestinians upset that Lebanese editorial cartoon compared them to the coronavirus

The cartoon shows two circular figures. One is labeled "April 13, 1975," the anniversary of the start of the Lebanese civil war, and the other "April 13, 2020." The 1975 figure is a Palestinian wearing a keffiyeh while the 2020 figure is the coronavirus.

Essentially, the cartoonist compared Palestinians to the coronavirus.

This caused an uproar.  Greek Orthodox Archbishop of Jerusalem Atallah Hanna said the cartoon "contradicts all human and moral values," and called on the Lebanese newspaper to apologize. He said,  “To compare the Palestinian with the Corona epidemic is a crime against the noble human, moral and cultural values.”

The DFLP called it "an insult to the Palestinian people and their militant history."

The Democratic Forum of Palestinian Media in Lebanon  issued a statement that the Lebanese newspaper's caricatures are "a moral fall and a sin and those responsible that must be held accountable." It added that "there is a difference between the freedom of opinion that we respect, and the abuse of human dignity of the Palestinian people."

Op-eds were written decrying the cartoon.

Hamas officials said the drawing is an affront to the Palestinian national personality and to the history and identity of the Palestinian people. "It contravenes the legal principles, charters of journalistic work, professional ethics and international laws," the terror group helpfully added.

One is that while the cartoon is undoubtedly bigoted, the number of Lebanese deaths from COVID-19 is 21. The number of Lebanese killed in the 1975 civil war was over 120,000, and it was sparked by PLO fighting the Christian Phalanges. So, yes, there is still a great deal of animosity in Lebanon towards Palestinians, even as they usually take care to pretend to support them.

The second point is that there have been quite a few Arab cartoons comparing Jews and Israel to the coronavirus, and none of these Palestinians who are so sensitive to bigotry seemed to be too upset at those. 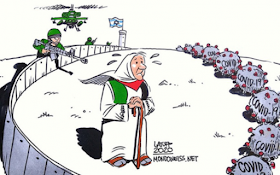 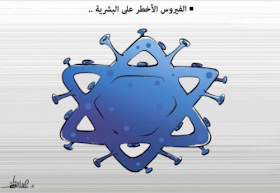 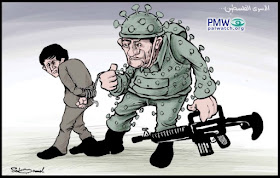 Even more interesting is the lack of coverage of this story in Western media. Lebanese bigotry against Palestinians is simply not a story. The reason seems to be that no one wants to disturb the narrative of Israel as the sole oppressor of Palestinians, if the Arab role in their misery was publicized as much as Israel's imagined crimes, it would reduce the pressure on Israel which seems to be the real goal of much of the international coverage of the region.

By objective standards, this is a newsworthy story. Yet the gatekeepers of news to the Western world don't want you to know about it.

We have lots of ideas, but we need more resources to be even more effective. Please donate today to help get the message out and to help defend Israel.
Elder of Ziyon at Wednesday, April 22, 2020
‹
›
Home
View web version