As I have reported previously, while people who pretend to be pro-Palestinian activists concentrate on the risk of COVID-19 in Gaza, they are silent about the much worse conditions in the overcrowded camps in Lebanon that Palestinians are forced to live in.

Now the first COVID-19 case has been found in an UNRWA camp in Lebanon.

A Palestinian refugee camp in Lebanon has been put on lockdown after the UN announced the first confirmed case of coronavirus in one of the country's numerous and crowded camps.

Medical experts were due to visit the Wavel camp in the eastern Bekaa Valley later on Wednesday to carry out tests, the agency added.

The testing will focus on the woman's relatives and people she has interacted with, as well as 50 others chosen arbitrarily "inside the camp and its surroundings", said Lebanon's official National News Agency.

In coordination with Lebanese security forces, Palestinian factions in charge of security have imposed a lockdown on the camp, preventing anyone from entering or leaving, the NNA report said.

The Wavel camp is tiny - a mere 250 meters by 210 meters in a rough rectangle. Lebanese law does not allow any of the camps to expand, so it is hemmed in. 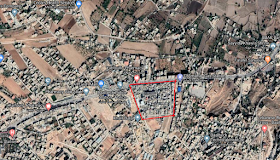 There are wildly varying estimates for the number of people who live there, but it appears to be between 3000-7000, which would make the population density in the camp to be between 60,000 and 160,000 people per square kilometer, far higher than any major city in the world (but comparable to other UNRWA camps.)

If this person infected a couple of others in the camp, then all the horrifying scenarios that anti-Israel activists predicted for Gaza would be worse by an order of magnitude.

But since Israel cannot be blamed, there will be no alarming headlines or tweets about this in the supposedly pro-Palestinian echo chamber. Lebanese bigotry against Palestinians, a topic I will touch on in my next post, is studiously ignored by these social justice warriors.  As of this writing, some three hours after wire services started reporting the story, only a handful of tweets mention "Wavel" - and zero from the people who pretend to care so damn much about Palestinians.


We have lots of ideas, but we need more resources to be even more effective. Please donate today to help get the message out and to help defend Israel.
Elder of Ziyon at Wednesday, April 22, 2020
‹
›
Home
View web version