Popular Al Jazeera host @kasimf points out that Zionism is successful and Arab nationalism has failed. His followers agree. 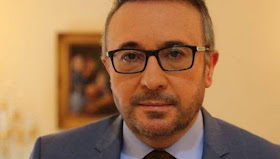 Faisal al Qassem is a popular host of an Al Jazeera TV debate show "The Opposite Direction" and is celebrated as being willing to break taboos in the Arab world. His Twitter account has over 5.5 million followers.

On Saturday, he tweeted:

Ha - The majority of Arabs, if they want to insult you, describe you as "Zionist", while knowing that the most successful project of the last century and the present is the Zionist project, while all Arab projects, especially those of the Arab nationalists, have failed. That's why, dear, before you use the word Zionist as a curse, you must first reach the shoes of Zionism and then we can talk.

He followed that up with:


When you read the Arab comments against the Zionists on Twitter and how sharp they are, the impression is that the Arab tanks are at the gates of Jerusalem, while their rulers lick the shoes of the Zionists under the table in order to keep them happy and keep themselves in their thrones, the last of which is the General of Sudan who sold the "Three no's" [of Khartoum] with a crust of bread and rushed to meet [Netanyahu] like the hired help.

People protested his comments, calling them Zionist, to which he responded: 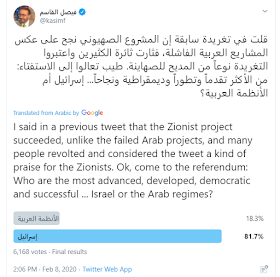 As you can see, nearly 82% of his followers agree that Zionism has been more successful than Arab nationalism.