Palestinians now say their most important shrine is - the Western Wall! 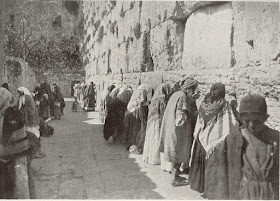 This passage is from the very beginning of an article in the Fatah website denying any Jewish connection, and claiming ancient Palestinian ties, to Jerusalem:

The "Al Buraq Wall" is what Palestinians have called the Kotel, the Western Wall, for only the past century. Before that there was no consensus of which wall surrounding the Temple Mount was considered to be the one that Mohammed supposedly entered in his night journey, although evidence points strongly to the southern wall, with its double gate, as described by Charles D. Matthews in 1932:

The evidence of Muqaddasi (985 A. D.), a citizen of Jerusalem itself, is unquestionably for the southern location. Muqaddasi speaks of the “Two gates of the Prophet,” Babai an-Nabi, in such a way as to make the identification with the Double Gate quite positive. The descriptions of Nasir-i-Khusrau, a Persian historian who visited Jerusalem in 1047 A. D., is quite arresting. He says (as quoted by the English scholar Le Strange, in his very excellent book, “Palestine Under the Moslems,” p. 178) : “One such as these (gates) is called Bab an-Nabi (or the Gate of the Prophet)-peace and blessing upon him, which opens toward the Qiblah point-that is, toward the south (toward Mecca). . . . The Prophet. . . on the night of his ascent into heaven passed into the Noble Sanctuary through this passageway, for the gateway opens on the road from Makkah.” What could be clearer? And from the hand of a Jerusalemite and reputable historian!

Either way, no Muslim would ever say that the Buraq Wall is more sacred than the Al Aqsa Mosque. To say that the mosque has no meaning without the Kotel - the one place that Jews have venerated for centuries when banned from even visiting the Temple Mount itself - is proof positive that the entire Palestinian narrative is a series of lies.

Is there any clearer evidence that the entire Palestinian claim is not meant to assert any historic or legal rights, but to destroy Jewish rights? Literally every Jewish shrine in the Holy Land is claimed by the Palestinians to be their own, which is a hell of a coincidence. And they have been strident in saying that the Kotel was theirs as well, the Palestinian TV only recently telling viewers that Palestinians must defend their rights to the site with their lives.

The rest of the Fatah article is filled with such lies, as in this section still in the first paragraph, where it says "history proves that Palestine with its capital, Jerusalem, is Arab before the feet of the first Jew entered (Joshua bin Nun.)" The Palestinians now claim to be descended from the Jebusites, a tribe that has no evidence of existence beyond the Jewish Scriptures, who have no evidence of being Arab.

Beyond the obvious fact that Jerusalem wasn't the capital of any other nation besides Israel/Judah and there was never a "Palestine."