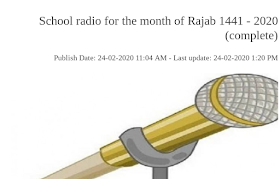 Today is the first day of the Islamic month of Rajab.

Like in many places worldwide, Palestinian schools have various announcements meant to be broadcast over school public address systems for various occasions. Sometimes these broadcasts include current events, prayers and the like.

Watania, a Gaza-based news organization, published a script yesterday of what was to be broadcast this morning in Palestinian schools on the occasion of the new lunar month. I don't think this is an official mandate, rather a suggestion of how to make Rajab relevant to students. No doubt some schools do broadcast what is suggested.

The suggested broadcast for today is antisemitic.

It includes this fervent prayer: "Oh Allah we ask that this year be a year of good and peace and that you cleanse the Holy Land from the spiteful Jews, for they are no match for You. Oh Jews, we have a great Lord;  take revenge on them, oh Vanquisher/Subduer, oh Allah, oh Allah, oh Allah."

I found some other transcripts of Palestinian school radio broadcasts sprinkled throughout the Internet and antisemitism is not unusual. For example, this one says Jews could only hold onto Israel because of Muslim negligence:


I do not fear the power of the Jews, but I fear the Muslims ’failing. The Jews did not take what they took with their power, but with our neglect, it is the negligence of the strong that strengthens the weak.


The Jews are fools because they occupied a state whose people are  untiring.
Every Palestinian is born a mujahid.

Palestinians learn their Jew-hatred from somewhere, and schools are one of those places.

We have lots of ideas, but we need more resources to be even more effective. Please donate today to help get the message out and to help defend Israel.
Elder of Ziyon at Tuesday, February 25, 2020
‹
›
Home
View web version