Ilhan Omar calls her critics bigots. It could be because she doesn't want people to read a new book about her.

She is saying that critics are bigots against Muslims or black people or immigrants. 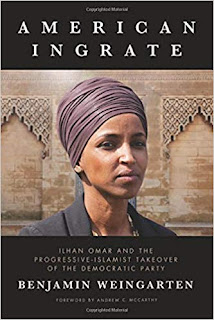 This is essentially her inoculation against criticism. It isn't about her words or ideology or her own bigotry - she is immune from attack because she can play the racism card.

So Omar, and the people in her circles which increasingly resembles the entire American Left, refuse to engage on the issues - her antisemitic statements, her offensive positions, her links to pro-terror organizations, her pretense of being feminist while refusing to admit misogyny in Islam, her paying a large salary to her lover and other corruption that is being revealed - and instead deflect criticism by labeling her opponents racist.

It is probable that this tweet was meant to be a response to the release this week of a book by Benjamin Weingarten about Omar and the threat that she represents.

The last thing she wants is for people to read it. For Omar, it is much better to imply that anyone who reads the book is vile.

We have lots of ideas, but we need more resources to be even more effective. Please donate today to help get the message out and to help defend Israel.
Elder of Ziyon at Tuesday, February 25, 2020
‹
›
Home
View web version