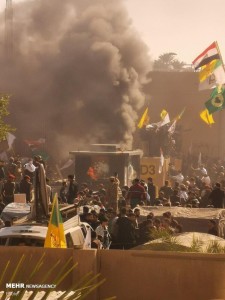 New York, January 2 - The Paper of Record followed up its delicate terminology in referring to violent attackers as "protesters" and "mourners" Thursday with a description of the Iran-backed mobs surrounding and invading the US embassy in Iraq's capital as demonstrating in solidarity with the embattled US Jewish ethnic minority.

The New York Times coverage of the embassy storming began Tuesday with pro-Tehran propaganda in the guise of impartial journalism, then proceeded Wednesday to invoke issues of questionable connection to the episode, but which allow the publication to paint Iranian machinations with a sympathetic brush. That tendency began in earnest in the lead-up to the 2015 nuclear deal with the Islamic Republic, when the Times carried water for the Obama administration and helped marginalize opponents of the arrangement, most notably supporters of Israel who raised concerns that the deal enabled, rather than constrained, Iran in its hegemonic ambitions. Iranian leaders have repeatedly stated intentions to destroy Israel or have predicted the Jewish state's demise.

In describing the embassy storming as a "vigil against antisemitism," the Times drew parallels to an actual vigil taking place in the New York area, where increasing antisemitic attacks have turned deadly in the last several weeks. That vigil, which organizers touted as opposing "all bigotry," involved no one from the "ultra-orthodox" Jewish communities most affected by the current wave of assaults; it served as a vehicle for social justice activists to showcase their concern and pet causes, some of which bear a direct causal relationship to increased antisemitism in the American public sphere.

Sympathetic descriptors of malign people or entities emerged long before the Times selected the "mourners" and "vigil" terminology: the Washington Post obituary headline for arch-terrorist Abu Bakr al-Baghdadi of the Islamic State, for example, called him an "austere religious scholar." The Post and Times have engaged in a years-long campaign to outdo each other in sympathy for groups and ideologies that may espouse genocidal, misogynistic, homophobic, racist agendas, but at least they oppose President Donald Trump, which redeems other offenses.

Editors at the times declined to disclose what other unconventional nomenclature they intend to employ, but experts predict with some confidence that its effect will swing in an anti-Israel, anti-American, anti-Jewish, anti-religious, or anti-West direction. "We've only ever seen these rhetorical devices go one way," observed media consultant Tenn Denschuss. "For some reason no headline writer there ever fails to live up to healthy journalistic standards in a way that actually makes Israel look good, for example. Quite remarkable."
We have lots of ideas, but we need more resources to be even more effective. Please donate today to help get the message out and to help defend Israel.
Elder of Ziyon at Thursday, January 02, 2020
‹
›
Home
View web version