Israel offers free schooling to Palestinians, so naturally this is regarded as evil

The Jerusalem Municipal Council approved Tuesday night a plan to construct an educational campus for Education Ministry schools near the city's Arab Shuafat and Anata neighborhoods.

These schools will be an alternative to the UNRWA (United Nations Relief and Works Agency) schools which currently dominate the area.

Naturally, the response to giving Palestinian children a free education and new schools is being slammed as another proof of Israel's evil. 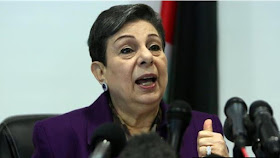 Hanan Ashrawi, member of the Executive Committee of the Palestine Liberation Organization (PLO), condemned on Thursday the announced plan of the Israeli municipality in occupied Jerusalem to replace UNRWA-run schools.

"The announced plan of the so-called Israeli municipality in occupied Jerusalem to replace UNRWA-run schools is an extension of the Israeli establishment's campaign of aggression against Palestinian rights and roots in the City,” Ashrawi said in a statement. “It is also an assault on multilateral institutions and international law.”

She continued, “This reprehensible plan also embodies the Israeli establishment's disdain for the United Nations, rejection of Palestinian rights, and illegal actions aimed at altering the historic, cultural, and demographic composition of occupied Jerusalem.”

Note that the original article says nothing about closing the UNRWA schools, but merely to provide an alternative. While I'm sure Israel wants to close the UNRWA schools that teach children to admire terrorists and to hate Jews, I am not sure that they can under existing agreements with the UN and UNRWA.

If this is true, then when Israel opens the schools, either some parents will want to take advantage of the Israeli curriculum - or they will be threatened to keep their kids in the underfunded and crowded UNRWA schools.

Of course, if UNRWA was truly an objective UN agency, given its budget woes it should welcome Israel offering to take over some of its functions - in fact, it should be pressuring Jordan and the Palestinian Authority to do the same for "refugees" who clearly aren't refugees under any definition. But UNRWA has long ago ceased to be useful and now it tries to stay self-perpetuating rather than the temporary agency it was meant to be.

We have lots of ideas, but we need more resources to be even more effective. Please donate today to help get the message out and to help defend Israel.
Elder of Ziyon at Thursday, January 02, 2020
‹
›
Home
View web version