Every Palestinian excuse for rejecting every peace plan is bogus. Here's how. 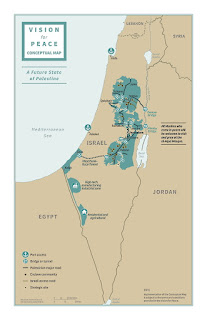 When Palestinians say that they cannot possibly have a state without their preconditions, which include:

* "Right of return" (to Israel, not to their own state!)
* Jerusalem as their capital
* Israels' release of terrorist prisoners
* 1967 lines

They are lying. None of those are prerequisites for a state. They are completely separate demands.

When Palestinians insist that they will not agree to any peace plan without those demands, they are saying that statehood is really not that important to them.  Neither is peace.

A little thought reveals that each of these demands does not even strengthen an independent Palestinian state nor do they help peace. However, every single one of those demands weakens Israel:

* "Right of return" to destroy the Jewish state demographically
* Jerusalem, specifically the Old City, to sever Jewish emotional and religious ties to the holy city
* Israels' release of terrorist prisoners to allow them to attack again (as has happened numerous times with previous prisoner releases)
* 1967 lines to ensure that Israel is only nine miles wide and vulnerable to ground attack


These demands are not only not peaceful - they are the antithesis of peace. They have nothing to do with an independent state. They are only designed to hurt Israel.

Yet Palestinian leaders, and anti-Israel activists, act as if these demands are preconditions for peace and not addressing them dooms any chance for peace. This is the opposite of the truth.

There is another argument to support Palestinian intransigence. It was described in an Atlantic article by Shadi Hamid last year:

I recently took part in a study tour on religion and nationalism in Israel and the West Bank organized by the Philos Project. One Palestinian official whom we met told us, “I’m not going to compromise my dignity.”

Our Palestinian interlocutor’s refusal to cede his dignity wasn’t a performance; it was despair. It felt to me like an epitaph. There have been conflicts in which leaders have made compromises that may have seemed like betrayals, only for history to view them as both bold and necessary. But those conflicts are not this conflict.

Palestinian activists tend to speak in terms of justice. An injustice was done, so it must be undone. Christopher Hitchens, in his valediction for the Palestinian American author Edward Said, wrote that his friend’s “feeling for the injustice done to Palestine was, in the best sense of this overused term, a visceral one. He simply could not reconcile himself to the dispossession of a people or to the lies and evasions that were used to cover up this offense.”

Pro-Palestinian protesters often chant the mantra of “no justice, no peace.” One former Israeli official we spoke with in Jerusalem had a different view. He said, “If we make this about justice, there will not be peace.” Too many Palestinians celebrate victimhood—fueled by a profound sense of injustice—rather than overcome it, he suggested.

But then we return to the question of dignity. No one should be asked to overcome their victimhood by giving up their dignity, the one thing even an occupier shouldn’t be able to take away. That might sound naive and impractical, especially for those who would rather Palestinians just get on with it, but that doesn’t make it any less true.

Hamid suggests that the conflict is not about land or statehood - from the Palestinian perspective, it is about "justice" and "dignity."

Yet these supposedly "dignified" people happily take charity from UNRWA and the EU. (In fact, when they don't get the free aid they are used to, they riot for their handouts.)

These "dignified" people keep their fellow Palestinians in "refugee camps" even if they live in the areas of British Mandate Palestine or if they are full Jordanian citizens. They choose to use their own people as pawns by pretending to be refugees. What is dignified about that?

And the "justice" argument is similar to the "dignity" argument. When people say that they will not accept any compromise that violates their own sense of dignity or justice, that means that they are the judge and jury as to what kind of peace plan is acceptable. It gives them veto power over any possible plan, no matter how generous, because they are the only people who can say that their dignity is restored or justice is served.

As long as Israel exists, they will not feel like they have any dignity nor justice. Because they consider the entire land theirs. Their maps show the entire British Mandate territory. They are taught that Jaffa and Nazareth are Palestinian cities. Anyone can see that people who believe that will never say that any peace plan will be good enough to make them feel dignified and that justice was served.

Nobody says that Israelis must have "justice" and "dignity" in any peace plan. The reason is obvious: because when that is demanded from both sides, peace is impossible. Yet no one sees any problem with using these terms that are anti-peace as demands for the Palestinian side.

Like it or not, any two state solution will involve compromise on both sides. The concepts of "dignity" and "justice" is incompatible with compromise - which makes them anti-peace.

We have lots of ideas, but we need more resources to be even more effective. Please donate today to help get the message out and to help defend Israel.
Elder of Ziyon at Thursday, January 30, 2020
‹
›
Home
View web version