When analyzing the answers to the to sets of questions, there was a significant correlation between the two, even though the people mostly on the Left who have anti-Zionist positions insist that they do not harbor any bit of antisemitism. 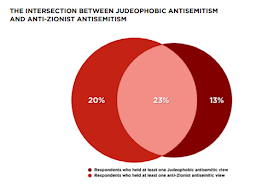 The 63% doesn't surprise me - most antisemites are also anti-Israel, despite the attempts by some on the Left to say the opposite. But the 54% of those who claim they are simply "anti-Israel" who also hold traditional antisemitic opinions should (but won't) be  a clear indication that the problem on the Left is not simply "anti-Zionism" but also the old fashioned Nazi-style Jew-hatred.

We have lots of ideas, but we need more resources to be even more effective. Please donate today to help get the message out and to help defend Israel.
Elder of Ziyon at Wednesday, December 04, 2019
‹
›
Home
View web version