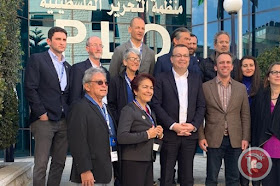 Ma'an reports that Fatah spokesman Osama al-Qawasmi received a delegation of thirty members of lawmakers from California today, telling them how awful Israel is.

Last month Qawasmi hosted a similar delegation of lawmakers from Wisconsin, both Democrats and Republicans. 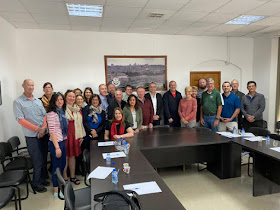 A quick look at Qawasmi's statements over the years reveals him to be an unrepentant antisemite.

"There is no regime in history - believe me, not Hitler, not the Nazis, not fascism - that has implemented what Israel is implementing against the Palestinians. "

2017: "The second protocol of The Protocols of the Elders of Zion says: Extremist [Islamic] religious streams must be created, as a complete contrast to the ruling regime [in Arab countries], regardless of which regime it is - be it national, Arab, secular, communist, or Marxist - so that the priorities of these regimes will change in a manner that fits the Zionists.

He also quoted the antisemitic "Protocols" in 2015 as if they are real.


This is pure antisemitism by any definition. Yet US state delegations apparently don't even bother to research who they will be speaking to.

Amazingly, the Wisconsin lawmakers visit to Israel was organized by the Milwaukee Jewish Federation. It is unclear whether it also organized the visit to Qawasmi.


We have lots of ideas, but we need more resources to be even more effective. Please donate today to help get the message out and to help defend Israel.
Elder of Ziyon at Wednesday, December 04, 2019
‹
›
Home
View web version