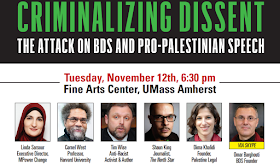 A BDS conference (with Linda Sarsour, Cornell West, Omar Barghouti via Skype and the usual crowd) is scheduled for November 12 at the University of Massachusetts/Amherst.

Some pro-Israel groups pressured the university to cancel, although it is not a university event and they are just leasing out the space.

The Chancellor of the university, Kumble Subbaswamy, invoked academic freedom and free speech in his statement allowing the conference, but he noted an irony with the BDSers:

An event scheduled for Nov. 12 on the UMass Amherst campus focusing on the anti-Israel “Boycott, Divest, Sanction” movement (BDS) is being presented by a private foundation – not by the university.  This private foundation has, as many non-UMass organizations regularly do, rented space on campus to host the upcoming event, which is being billed as a panel discussion on “The Attack on BDS and American Democracy.” Despite our concerns regarding this particular gathering, based on its title and past statements by its panelists, as a public institution UMass is bound by the First Amendment to the Constitution to apply a content-neutral standard when making facilities available to outside organizations. For this reason, and in adherence to the principles of academic freedom, the university will take no steps to inhibit this event.

That last sentence is as good a rejoinder to campus BDS activities as any ever made.

He went on to say that the event it one-sided and could alienate Jewish students, but again, he allowed it on the grounds of academic freedom.

So the BDSers won, right? You wouldn't know it based on their reaction. They put together an open letter signed by over 120 of the university's academics complaining about Subbaswamy's statement as not giving them enough academic freedom, somehow.


We, the undersigned UMass Amherst faculty, express our deep disappointment and dismay at the recent statement from Chancellor Kumble Subbaswamy regarding the upcoming November 12 event at the Fine Arts Center entitled “Criminalizing Dissent: The Attack on BDS and American Democracy.”...While we appreciate the chancellor’s stated commitment to freedom of speech, and his refusal to cancel either this event or the equally controversial event that occurred on May 4, his recent statement falls far short of the robust defense of academic freedom, and the integrity of the campus community, that we expect of our chancellor. Indeed, whether wittingly or not, his statement lends credence and legitimacy to the claims of those who have been fighting to silence criticism of Israeli violations of human rights, and to vilify those who publicly press these criticisms, including students, faculty, and staff on this campus.

Some of the signers explained their reasons for signing, and a number of them actually invoked academic freedom - the very thing they are against!


Louise Antony, Professor, Philosophy: "I am outraged, disappointed, and gravely offended by Chancellor Subbaswamy’s allegations that support for BDS is anti-Semitic, and that the attempt to promote civil discussion of BDS is hateful or racist.I challenge the Chancellor to cite one piece of evidence that the activists scheduled to speak at the 'Criminalizing Dissent' harbor or advance the hateful positions that he attributes to them."

He didn't say BDS is antisemitic, he said it "is considered by many as anti-Semitic." Sorry you apparently never learned to read.

But anyway, Louise, if you want any evidence that BDSers are antisemitic, how about the fact that the BDSers only boycott Jewish-owned businesses, and not those owned by Arab Israelis? Sounds like antisemitism to me. How come they claim that Jewish Israelis who move across the Green Line are settlers, but not the Arab Israelis who do? Have they boycotted any Israeli-Arab professors like Tel Aviv University's Amal Jamal who gave an anti-Israel lecture at London School of Economics?

Nope. Only Jews. What do you call that, Louise?


Theresa Austin, Professor, Teacher Education and Curriculum Studies, College of Education: "During these times, open discussion is needed to dismantle the tyranny of the dominant."

The only people stopping open discussion are the BDSers you support.


Ann Ferguson, Professor Emerita, Philosophy and Women, Gender, Sexuality Studies: "Totally support the statement! We need to defend academic freedom and challenge such unsupported normative claims that a particular action or point of view is 'anti-Semitic' when it concerns the policies of a nation-state which does not represent the views of all Jews or Semite people."

Really? A professor thinks that anti-semitism means against Semites? And again, if you support academic freedom, why are you supporting a BDS conference?

Way to go, Captain Obvious. No one disagrees. You are so brave.


Sangeeta Kamat, Professor, Education Policy Studies: "I feel proud that my university is the site where we can hear the voices of those silenced and repressed such as the struggle for Palestinian rights and dignity. "

Care to give any examples of Palestinian opinions - easily found in pages of major newspapers and TV shows and social media - being silenced? (Outside those being silenced by the PA and Hamas, that is.)


Banu Subramaniam, Professor, Women, Gender, Sexuality Studies: "It is more critical now than ever for us to support academic freedom."

And the people who are against academic freedom are...? Oh yes, the group you are not signing open letters against.


Jacqueline Urla, Professor, Anthropology: "It is our duty to defend academic freedom. I am troubled by two things in particular: the characterization of a discussion of boycott, a long-standing means of protest, as exclusionary, and the conflation of BDS with anti-semitism."

Correct me if I'm wrong, but aren't boycotts exclusionary by definition?


We have lots of ideas, but we need more resources to be even more effective. Please donate today to help get the message out and to help defend Israel.
Elder of Ziyon at Wednesday, October 30, 2019
‹
›
Home
View web version