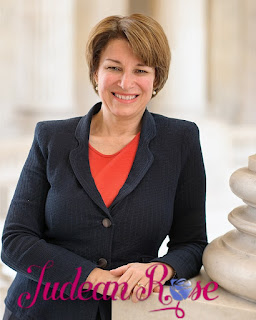 Amy Klobuchar is, out of all the Democratic primary hopefuls, undoubtedly the most pro-Israel of the bunch. Perhaps that’s why she is often asked if she is Jewish. She is not, though the JTA has called her the “go-to Democrat for the Orthodox.”
Klobuchar has spoken out against antisemitism and for Jewish values. Her official website states, “As staunch allies of Israel, we must also ensure that harmful movements, like the resurgence in anti-Semitism and the Boycott Divestment and Sanctions (BDS) Movement are not successful.” But Klobuchar has done more than just talk about these things. To her credit, Klobuchar was the lone Democratic candidate (out of seven) who, back in February, voted for the $38b military aid package and anti-BDS bill. It is striking to note that while a majority of 76 senators voted for the legislation, 22 Democrats voted against it.
The bill, called Strengthening America’s Security in the Middle East Act of 2019, authorized state and local governments to demand that contractors make a declaration that they do not support boycotts of Israel and the territories (Judea and Samaria). With her vote, Klobuchar proved that she is not afraid to be the lone Democratic defending Israel’s interests.

Klobuchar On the Embassy

Klobuchar has also said she would not move Israel’s American embassy back to Tel Aviv. But don’t get too excited. She might just reverse Trump’s recognition of Israel’s annexation of the Golan. “I think it should be part of the negotiations,” said Klobuchar, speaking to Jewish Insider.
Reversing that recognition would certainly not be a pro-Israel move. When Trump moved the embassy, he wormed his way into Israeli hearts and minds, but when he recognized Israel’s annexation of the Golan, he rose above even Truman in Israel’s collective esteem. No president had ever done so much for Israel.
The thought that Klobuchar would reverse this move is horrifying and yes, puts Israel on shaky existential ground. Syria is a bad actor with Iran, Turkey, and Russia inside, all with their fingers in the pot. We need that territory to remain safe and secure. So when Klobuchar speaks of a reversal of Trump’s recognition, it makes a mockery of her statement that she “will never stop fighting for a strong U.S.-Israel relationship and a secure Israel.”

Klobuchar also wants to renegotiate the disastrous and illogical JCPOA, which is a tool to help Iran get the bomb so they can murder lots of infidels. It is impossible to understand how anyone ever supported this "deal," but Klobuchar says, "While the agreement is by no means perfect, I have concluded that it is our best available option to put the brakes on Iran’s development of a nuclear weapon and that is why I will support it.  In conjunction with that support I will also push for increased security assistance to Israel and enhanced defense cooperation with our Arab allies to combat terrorism throughout the region."

Klobuchar seems to like and care about Israel, but is anti-Netanyahu, though half the people of Israel voted for him. “Trump has supported some of the prime minister’s moves and claims during the election that I disagreed with,” she said at JStreet's recent national conference. “And I think all of this is resulting in a loss of support for Israel. That’s very bad. As someone that views Israel as our beacon of democracy, I think it is important that we build support in the US.”
Which Netanyahu election claims and moves did she disagree with specifically? Bibi’s pledge to exercise Israeli sovereignty over Judea and Samaria where some 450,000 Israelis reside. Klobuchar is against Jews building homes in Judea and Samaria, something that never fails to stymie this author. How can anyone be against Jews building homes unless that person is antisemitic? What can possibly be wrong about Jews building homes? Especially when they are built on uninhabited hilltops in Jewish indigenous territory?
The anti-settlement people say that settlements prejudice the outcome of possible negotiations. But this is nonsense. Facts on the ground in the form of housing would never get in the way of peace. Israel expelled more than 8,000 Jews from their homes during Disengagement. We dug up our dead and moved them, too. We proved we would go to any lengths for the sake of peace.
Being anti-settlement is not about negotiations and it's not about peace. Homes don’t get in the way of either of these. Being anti-settlement is about the belief that Jews don’t deserve even basic rights, such as a roof over their heads. To my mind, coming out against Jews building homes is the purest form of antisemitism that exists.

Klobuchar, on the other hand, was against Trump pulling American troops out of Syria, saying this was bad for Israel. “When you think of it from an Israeli perspective, and you think of it from the perspective of our allies, once again, this president has chosen to let Russia have a lead and then has again backed away from our allies,” said Klobuchar at the same J Street conference.
Is this true? I doubt it—we didn’t feel that Trump was backing away from Israel. But Trump’s pull-out definitely wasn’t good for the Kurds and most Israelis were upset about that. We feel a kinship with the Kurds and their desire for self-determination and a state of their own. We didn’t like the idea that Trump would move out of the way for Erdogan to perpetrate a genocide.

Klobuchar On A Two-State Solution

Klobuchar is in favor of a two-state solution. Now this is not groundbreaking news. Klobuchar shares this penchant for the two-state solution with all the other Democratic primary hopefuls. But none of the parties to the dispute desires a two-state solution. Not Israel and not the Palestinian Authority. And certainly not Hamas, whose charter calls for the destruction of the State of Israel. So why trot out the same tired formula that is unpalatable to all of the people it would actually affect?
Pushing the two-state solution shows a certain naiveté, a cluelessness about the region and the people. It suggests that like it or not, a Democrat in the White House will impose a solution on Israel and its counterpart(s), mindless of its reception. That’s not pro-Israel. It’s Big Brother writ extra-large, meddling in other people’s business.

Business Insider gives Klobuchar a primary power ranking of eight among the 16 Democratic hopefuls still in the race as of October 25, 2018. This represents a move up in the polls for the Minnesota senator, as BI downgrades Julian Castro and Tulsi Gabbard. Could Klobuchar’s star still rise? It’s possible. These are still early days. But in terms of name recognition, Klobuchar still lags way behind that of Bernie Sanders, Joe Biden, or Elizabeth Warren.
Would I take a Klobuchar over Sanders, Biden, or Warren?
Damn straight.
But that’s not what should happen.
Because being pro-Israel isn't just about sentiment, eating hummus, or dancing a hora. It's not even about giving money to Israeli causes. Being pro-Israel is about knowing the issues down to the nitty-gritty details; caring about the people who live there; and using your vote to make things better.
There isn't all that much you can do to bring peace to the region. But your vote has the power to help or hurt Israel. Use it wisely and don't vote Democrat.

It's the one thing you can do from there.
We have lots of ideas, but we need more resources to be even more effective. Please donate today to help get the message out and to help defend Israel.
Varda Meyers Epstein (Judean Rose) at Wednesday, October 30, 2019
‹
›
Home
View web version