An amazingly vacuous tweet from a person and organization that we've come to expect such from: 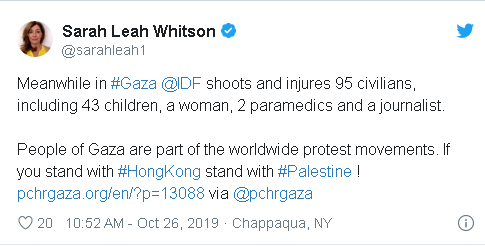 Human Rights Watch sees a similarity between protests in Hong Kong and riots in Gaza?

Hong Kong demonstrators don't shoot rockets into China. It doesn't start fires with balloons or kites in China. Most of all, they are not controlled by internationally recognized terrorist groups that decide if  and where the protesters gather, when, and what activities they will do. Terror groups that decide how many children will approach the fence with Israel and put their lives in danger.

Hong Kong protesters don't have Molotov cocktails (as the PCHR article she links to admits) and guns. 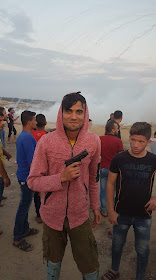 The only comparison between Gaza and Hong Kong is that Gaza could have become a Hong Kong by now if its citizens and rulers wanted to. After Israel's disengagement they could have built a Mediterranean paradise, tourist hub and high tech center - there was no blockade then.

Instead, they decided that they wanted to keep attacking Israel.

This is a very false analogy, but HRW and Whitson have a monomaniacal hate for Israel that trumps all logic.


We have lots of ideas, but we need more resources to be even more effective. Please donate today to help get the message out and to help defend Israel.
Elder of Ziyon at Sunday, October 27, 2019
‹
›
Home
View web version