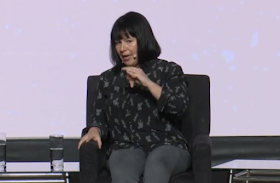 J-Street likes to pretend that it is pro-Israel and that the people on the Right who claim to be pro-Israel are really anti-Israel by considering parts of the West Bank to be part of Israel in any final status agreement.

But as this excerpt from the J-Street Conference indicates, Michelle Goldberg of the New York Times thinks that any Democratic candidates who are "too" pro-Israel are also "far-Right."

"What I think is interesting is that this is going to be...the first presidential primary where some candidates will pay a price for being too pro-Israel, and that was never a thing before. That could potentially change politics if there is a price to be paid too far-Right as well as being too far-Left."

And yes, she actually implied that some Democratic candidates were so pro-Israel as to be considered "far Right."

(I have no idea what candidate she has in mind who could remotely be considered "too" pro-Israel to the extent that it would hurt him or her. I certainly haven't seen anyone in the Democratic presidential field who remotely qualifies as such.)

She did preface this by saying that most of the candidates were still sticking to the old "pro-Israel" playbook of supporting our only democratic ally in the Middle East, which (in my impression of what she means) sounded like everyone knows this is just something they have to say even if they don't believe it. I was honestly expecting her to finish that statement with "blah, blah, blah."

The entire video is filled with smug, "we know better than Israel" comments. Similarly, tossing around idiotic statements like the US and Israel are turning "fascist" is regarded as accepted wisdom. J-Streeters position themselves as messianic figures who are the only ones who see the truth and everyone else is simply too dense to recognize their brilliance.


I read the PLO positions in the original Arabic. I know very well how they really think. If you think that what they say to a @jstreetdotorg conference is remotely accurate compared to how they speak in Arabic, you are a complete fool. And you are willing to push their lies.
— Elder Of Ziyon  ҉ (@elderofziyon) October 25, 2019

We have lots of ideas, but we need more resources to be even more effective. Please donate today to help get the message out and to help defend Israel.
Elder of Ziyon at Sunday, October 27, 2019
‹
›
Home
View web version