"Students for Justice in Palestine" proud of harassing a Holocaust survivor

This video was proudly uploaded by a branch of Students for Justice in Palestine.


Earlier this week, Holocaust survivor Harold Kasimow spoke at Benedictine University about his experiences and the horrors of living as a Jew in Europe during the Shoah.

A Palestinian student named Ayah Ali decided to harass him, asking him whether he opposed the "exile and ethnic cleansing of the Palestinian people" that, she says, is "similar" to the systematic genocide of millions of Jews.

Although the question is ludicrous and patently offensive, Kasimow tried to be polite and say that he is not expert enough to opine on that, that it is a complicated issue and that others could discuss the Palestinian issue with more authority, although he did say he thinks Israel should exist and he hopes for peace between the two sides.

Ali did not deserve to be treated politely. Kasimow should have told her that if Israel existed in 1939, his family could have been saved - and she would have preferred that they die. He should have said that she has no idea what genocide and ethnic cleansing means and should take a basic class on the subject before lecturing him. He should have said that he knows a thing or two about antisemitism and she is the one who qualifies for wanting to continue the Nazi Final Solution. 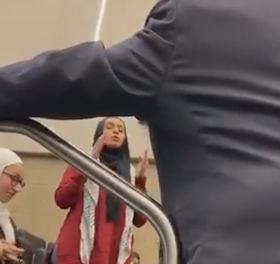 The obnoxious student didn't stop and kept trying twice more to corner him into a yes or no answer that he politely refused to provide.

The student called herself a "survivor of the intifada," literally comparing herself to the Jews of Europe in the 1940s, as if the intifada was an Israeli action against Palestinians rather than a terror spree of bus bombings and shootings of Jews.

Ali left in a huff because she pretended to be so "hurt" that Kasimow didn't regard her suffering as comparable to the Shoah.

Benedictine SJP was very happy with the sick display of Arab antisemitism, tweeting:


Inspired by his words and beliefs, an SJP Benedictine member mentioned a current situation that is ongoing: the genocide, ethnic cleansing, and exile of Palestinians living in under occupation. Palestinian children have suffered from the lack of basic human rights and are targeted because of their identity. However, to our surprise, Mr. Kasimow was in full support of the Israeli state that is built upon the genocide and ethnic cleansing of the Palestinian people.

To make this even more absurd, in 2017, Ayah Ali explicitly advocated genocide of Jews. 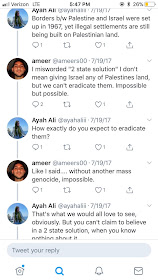 She would love to see a genocide six million Jews.

We have lots of ideas, but we need more resources to be even more effective. Please donate today to help get the message out and to help defend Israel.
Elder of Ziyon at Tuesday, October 29, 2019
‹
›
Home
View web version