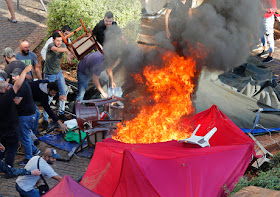 Hundreds of Hizbullah and AMAL Movement supporters, some wielding sticks, on Tuesday attacked a protest camp set up by anti-government demonstrators in downtown Beirut, burning some of its tents and dismantling others.

The violence came shortly after dozens of other Hizbullah and AMAL supporters, also wielding sticks, attacked a roadblock set up by the protesters on neighboring Ring highway, a main thoroughfare in the capital.

Groups of protesters eventually returned to the main squares and began repairing their tents, while others went back to blocking the roads. They could be heard chanting one of the main slogans of the protests, "All means all," which is seen as referring to all of Lebanon's political factions, including Hizbullah and its allies.

It was unclear how many people were wounded. Fights broke out in places and security forces could be seen beating some people with batons.

The protesters armed themselves with wooden batons and metal poles as the Hizbullah and AMAL supporters approached but fled when the counterdemonstrators arrived in larger numbers. Security forces later fired tear gas to disperse them, but only after they had destroyed and set fire to several tents.

"There are political orders to attack. This was not spontaneous," said one demonstrator alluding to AMAL and Hizbullah, neither of which were spared by protesters, including from their own base.

The violence comes on the 13th day of Lebanon's anti-government protests, which have been an unprecedented expression of anger that's united millions of Lebanese against what demonstrators say is a corrupt and inefficient political class in power for decades since the 1975-1990 civil war.

But in recent days, Hizbullah leader Sayyed Hassan Nasrallah grew critical of the protests, claiming they have been backed and financed by foreign powers and rival political groups. He called on his supporters to leave the rallies, and urged the protesters on Friday to remove the roadblocks. The mass rallies have paralyzed a country already grappling with a severe fiscal crisis.

Iran's Ayatollah Khamenei also said that the protests were being orchestrated by Zionists and Sunni Arab countries.

Apparently, Khamenei and Nasrallah decided that they stand to lose less by attacking the protesters than showing sympathy as Hezbollah did earlier.

Recently, Hezbollah leader Hassan Nasrallah appeared on Khamenei's website to say that Iran's leader was involved in creating his organization from the start:

Iran’s Supreme Leader Ali Khamenei was heavily involved in the establishment of the Iranian proxy group Hezbollah, said Hassan Nasrallah, the leader of the terrorist organization.
In a five-hour interview with Khamenei.ir, the supreme leader’s website, Nasrallah said that during “the early years of the establishment of [Lebanon’s Hezbollah organization], he [Khamenei] was involved in everything. The principles, goals, foundations, criteria, and guidelines that we had, [he] provided a solution to every issue.”

We have lots of ideas, but we need more resources to be even more effective. Please donate today to help get the message out and to help defend Israel.
Elder of Ziyon at Wednesday, October 30, 2019
‹
›
Home
View web version