Forward opinion editor Batya Ungar Sargon came face to face with the ugliness of leftist antisemitism when she was invited to speak at Bard College last week.

She was going to participate in a few sessions in a conference on "Racism and Antisemitism" at the Hannah Arendt Center at Bard.  One of them were about how to work with people with different opinions on President Trump, and another was about "Racism and Zionism: Black-Jewish relations."

Her first session, though, was called "Who Needs Antisemitism?" with Ruth Wisse and Shany Mor. This session wasn't about Israel or Zionism, but purely about antisemitism today. It was the only session where Jews discussed antisemitism.

That was the only session that was targeted by protesters from Students for Justice in Palestine.

Ungar-Sargon was mystified, and spoke to the protesters: "I told them that I respected their passion and commitment to what they thought was right, but asked why they had picked this panel.

"'Come to my panel tomorrow,' I said. 'Come protest my comments on Zionism. I’ll be talking about the occupation. Bring your signs.'"

She kept trying logic on people who were animated by hate not for Israel but for Jews. Yet she couldn't quite believe it - these were people she often agrees with about Israel, couldn't they see that protesting three Jews talking about Jew-hatred was antisemitic?

Her biggest shock, though, came from her fellow speakers and other academics who defended the obviously antisemitic protest.

“I disagree with what she is saying,” Shahanna McKinney-Baldon, who was to be part of Batya's panel on racism and Zionism the next day, told the SJPers. “I support what you’re doing. I think you should protest.”

When the session began, students started their planned interruption when Ruth Wisse spoke. Ungar-Sargon noticed that several of the conference speakers were applauding the students.

Not one person apologized to her for these interruptions. No one from the conference denounced the attempts to shut down a session on antisemitism by antisemite. Academics seemed to welcome the explanation given by one of the protesters that any discussion of antisemitism is really about supporting Israel.

Worse yet, at a party afterwards for conference speakers, Etienne Balibar, a French philosopher  at Columbia University, told Batya he supported the protesters. “Why are you silencing Palestinians?” he demanded. “There should have been a Palestinian discussing anti-Semitism. They have many thoughts about it!”

This was a session about antisemitism in America. 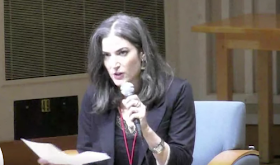 To Batya's credit, she had enough. At her planned session on Black-Jewish relations the next day, she gave a short speech about what she had experienced. She noted her bona-fides at publishing more Palestnian voices in her opinion pages than all major media combined, how she convinced Jews to vote for the Arab parties in Israel - but that what she experienced wasn't anti-Zionism but antisemitism, and her fellow panelists who she used to idolize as luminaries were cowards who egged on pure antisemitism when it appeared right in front of them.

And she walked off the stage.


If anyone claims that there is no such thing as leftist antisemitism, this proves they are just as craven and complicit as the academics that applauded the supposedly "pro-Palestinian" SJP when they interrupted a session on antisemitism - just because talking about antisemitism might get people to be more sympathetic to Jews.

Will Ungar-Sargon be more aware that a lot of the people she proudly publishes in The Forward are also antisemites in "anti-Zionist" clothing, no better than the academics she called out? I don't know, but at least here she recognized antisemitism when she saw it, and she acted in the most effective way she could.

We have lots of ideas, but we need more resources to be even more effective. Please donate today to help get the message out and to help defend Israel.
Elder of Ziyon at Sunday, October 13, 2019
‹
›
Home
View web version